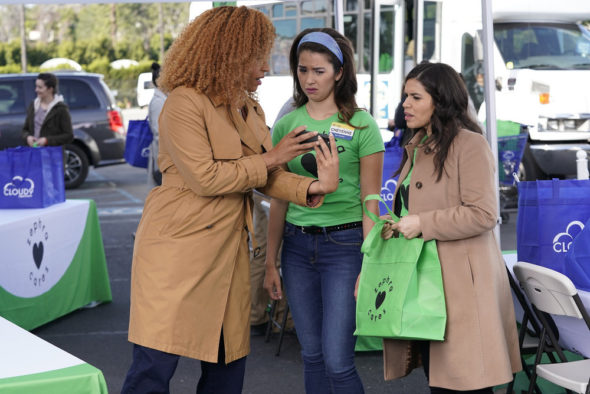 Two more series may have shortened seasons due to the halt of production, because of concerns over the coronavirus. Last Man Standing was set to wrap filming on its current season on Tuesday, but the cast and crew won’t be filming a season finale in the immediate future. The cast and crew are willing to return once it is safe to do so to film the finale, per Deadline. However, if the shutdown continues longer than expected, getting everyone back to film the finale could be an issue. The FOX comedy hasn’t been renewed yet.

Meanwhile, Superstore has wrapped production ahead of filming its fifth season finale. Production came to an end on Friday with the wrap of the season’s 21st episode. America Ferrera revealed that the series’ cast and crew will not return to film the finale.

The season five finale was meant to be Ferrera’s final episode of the NBC series. Per TV Line, Ferrera said the following in a post to her Instagram:

“Today is unexpectedly my last day shooting on Superstore for this season. We are shutting down production, as are all shows on the Universal lot.”

Ferrera’s character may still get a proper good-bye on the series. It might just happen at the start of next season instead. Superstore has already been renewed for a sixth season.

What do you think? Are you surprised that Superstore ended its season early? Do you think Last Man Standing will end up filming its season finale?

We would rather see everyone safe. We will wait patiently, just to have everyone back and safe. Please do not cancel last man standing. We love it!

Hey, the cast & crew of Last Man Standing said they all would be willing to wrap up the season finale once it’s safe. So, I can be patient, and wait. No biggie! The people’s safety is important! Love the show! Lord willing, there will be a SN8 finale and a Season 9 come September.

Obviously, I’m disappointed that the TV season for many shows will come to an abrupt halt and we won’t see full seasons/season finale episodes of many show. Disappointed, but of course, its understandable why this is happening. Better safe than sorry.

Safety first! Good call made by those in charge.

Now go wash your hands everyone!