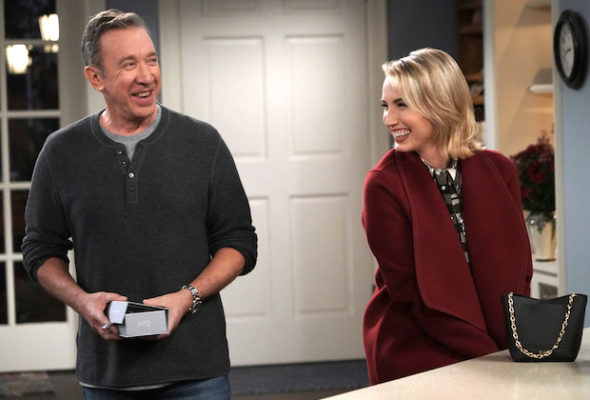 The cast and crew of the Last Man Standing TV show have two reasons to celebrate. The sitcom will reach its 150th episode tomorrow night and, the series has been renewed for a second season on FOX, the comedy’s eighth season overall.

Last Man Standing stars Tim Allen, Nancy Travis, Amanda Fuller, Molly McCook, Christoph Sanders, Jordan Masterson, Hector Elizondo, Jet Jurgensmeyer, Krista Marie Yu, and Jonathan Adams. Kaitlyn Dever will recur. The series revolves around Mike Baxter (Allen), the marketing director of the Outdoor Man sporting goods stores and a “man’s man”. His family doesn’t see eye-to-eye with him so it can sometimes be a little tough for Mike to stand his ground and stay in touch with his inner man.

The seventh season of Last Man Standing on FOX is averaging a 1.13 rating in the 18-49 demographic and 5.89 million viewers. Compared to season six on ABC, that’s down by 2% in the demo and down by 8% in viewership.

While the network has renewed Last Man Standing, two other FOX shows haven’t been so lucky. Rel and The Gifted were both cancelled in the past 24 hours.

FOX has renewed the hit family comedy LAST MAN STANDING, starring Tim Allen, for the 2019-2020 season, it was announced today by Michael Thorn, President, Entertainment for FOX Entertainment. The series’ return marks its second season on FOX, and eighth in total.

“Hard to believe LAST MAN STANDING hits 150 episodes this week and it gets better with another upcoming season at FOX!” said Allen. “Great news for all of us who are creating these stories and working our pants off to make you all laugh. It’s another big high-five to the legions of loyal fans who have faithfully kept us front and center and huge on the radar. Thanks to our family at FOX who continue to make us feel so at home. Man, if we keep this up, they might have to call our show: Last Man Unable to Stand.”

“LAST MAN STANDING roared out of the gate on FOX, and has maintained its ratings dominance ever since,” said Thorn. “Much of that credit goes to the incredibly funny and talented Tim Allen, not to mention Nancy, Hector and the rest of the show’s great cast. We’d like to thank Kevin, Matt and the entire crew, along with our partners at 20th Century Fox Television, for overseeing one of television’s most popular comedies. We’d also like to congratulate them all on reaching 150 episodes – a milestone that’s well-deserved.”

LAST MAN STANDING averages more than 11 million Multi-Platform viewers, ranking as the #1 scripted program on Friday night, with a 29% advantage over #2 “Blue Bloods.” The series improves upon FOX’s year-ago Friday 8:00-8:30 PM half-hour by +50% in Adults 18-49 and +112% in Total Viewers. LAST MAN STANDING’s fall 2018 premiere was the most-watched Friday regular comedy telecast on any network in 15 years.

In celebration of the 150th episode, the original pilot for LAST MAN STANDING will stream on Twitter tomorrow, Friday, April 19, for 12 hours starting at 9:00 AM PT. Join the celebration here: https://twitter.com/lastmanstanding

What do you think? Do you like the Last Man Standing TV show? Will you be watching season eight of this FOX sitcom?

I love this show. Have been watching it from day one.

I find the quick comedy always capturing. Had falsely heard show was going to be cancelled. Miss Eve, and wonder why that has to be the case. She had good parts, and integrated with the family. I would think she fits in as patriotic, and she is now not important. Tim Allen is listed as Diego in credits? He must have lost a bet. Larabees work, in the show, and his being part of Outdoor Man. When Jay Leno became more than a guest cameo, why does his character have to be dumb? Would rather see Eve, and her character… Read more »

I was pleased that Last Man Standing was picked up. I always enjoyed the episodes, how about canning the canned laughter has become over powering. Better to watch with captions and sound off.

I LOVE LAST MAN STANDING; HAVE BEEN A SUPPORTER ALL ALONG. DOES ANYONE MISS EVE AS MUCH AS I DO? THE SHOW IS NOT THE SHOW WITHOUT EVE.
ANYONE AGREE?

Enjoy the humor, back and forth of liberal vs conservative, but for pete’s sake, writers and Tim Allen, if you are going to be “outdoor man” please know a little about the “outdoor gear” you claim to adore. Good thing I wasn’t drinking anything when “Outdoor Man” was handling a Colt SAA revolver and called it a “single shot”. Look it up! It is called the SAA. That stands for Single Action Army revolver. You see, it is a revolver. The cylinder has 6 holes in it for 6 cartridges. 6 shots. Not one, but six. Not a single shot… Read more »

Give me a break, Eric! I am sure that there are those who believe everything that they see and hear on television. What you are complaining about would matter in the real world, but this is television. One does not have to be as precise as you expect them to be. Only people like you who know the particulars would be concerned. I am sure that people are not going to be affected by misinformation as you expect them to be.

One of the most intelligent and entertaining shows on tv. I have watched every episode until last year, no internet in helendale. But ill catch up when i move back home to camp Pendleton soon.

No I will not be watching. Tim Allen makes many snide remarks about Obama and I feel it is wrong for him to do this. Sad that he cannot keep his nasty remarks off the show.

Yes .we won’t miss even one episode!

I was glad when Fox picked up the series but I will say that I am very disappointed in the new Mandy. Molly McCook is a poor imitation of the original. Molly Ephriham did an excellent job of playing a dizzy blond without being one. The physical change was too drastic and the new Mandy just tries to imitate the original and fails. It is very distracting. I will continue to watch but not sure how much of her I can take. The ratings would be higher without her.

I agree with Judy ! I like Molly McCook but the role just isn’t the same without the original Mandy. Still love the show though.

I agreed, I liked the old Mandy, why did she not return?

I totally agree that the new Mandy is very distracting. We watch the reruns every night, and were so happy to see the new season start. We were hoping that Mandy’s character would improve. Sadly she just can’t pull it off. Please listen to your fans. I’m sure she is a very nice person, but not there.

Did you ever think that the actress who played Mandy left for HER reasons and was not replaced by the Producers for their reasons? I think that this is similar but not quite the same as the replacing of Charlie Sheen with what’s his name on Two and a Half Men! That show went downhill after Sheen was booted. Of ccourse, the bottom line is it all comes down to the writers. Actors act according to the script.