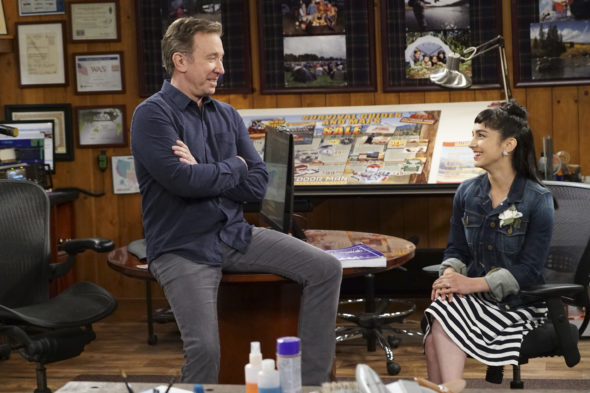 As reported earlier, FOX has picked up the Tim Allen sitcom for a seventh season after ABC cancelled it last year. The returning cast also includes Nancy Travis, Amanda Fuller, Jonathan Adams, Christoph Sanders, Jordan Masterson, and Hector Elizondo. The roles of daughter Mandy and grandson Boyd, previously played by Molly Ephraim (above, with Allen) and Flynn Morrison, will be recast. Kaitlyn Dever (daughter Eve) will return in a recurring role.

During this summer’s TCA panel, Abbott revealed season seven of Last Man Standing will not address the Trump administration directly:

Mike Baxter is a conservative, a Republican, he holds those ideals. The central character has a more conservative [view, but] we don’t really do issues of the week. We consider ourselves a family show with a traditional character at the center of it.”

Allen said that he believed ABC’s cancellation was a “financial decision” and not a political one. He does, however, feel that it was handled poorly because they didn’t have any warning.

Fans can expect at least one new character in seasons even — a Chinese foreign exchange student:

Vanessa, when she was in her teens, went on a foreign exchange and she’s been a big supporter of that. She wants to bring in a child and support that program, so they [do].”

In addition, grandson Boyd will be “aged up” to 12 years old so, the writers can introduce storylines about “a young man on the cusp”. Also, Mikes dad, played by Robert Forster, will pass away so there will be elements of grief and mortality in season seven.

The new season of Last Man Standing premieres on FOX on September 28th at 8 p.m. ET/PT.

I love Last Man Standing. I will certainly keep watching it.