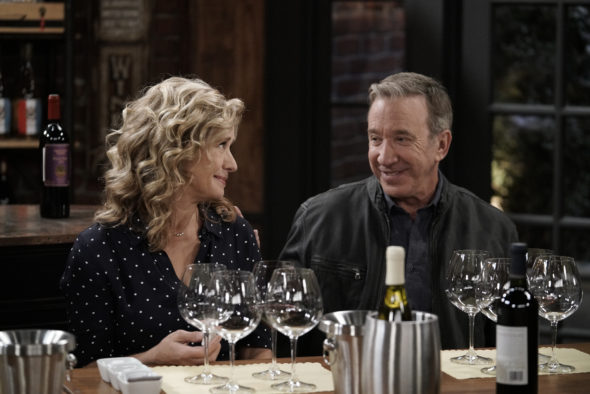 Are fans sticking with the Baxters? Has the Last Man Standing TV show been cancelled or renewed for a ninth season on FOX? The television vulture is watching all the latest cancellation and renewal news, so this page is the place to track the status of Last Man Standing, season nine. Bookmark it, or subscribe for the latest updates. Remember, the television vulture is watching your shows. Are you?

The eighth season of Last Man Standing averaged a 0.74 rating in the 18-49 demographic and 4.25 million viewers. Compared to season seven, that’s down by 32% in the demo and down by 26% in viewership. Find out how Last Man Standing stacks up against other FOX TV shows.

Will FOX cancel or renew Last Man Standing for season nine? Though the ratings are down, they are good enough for the series to be renewed. I’ll update this page with breaking developments. Subscribe for free alerts on Last Man Standing cancellation or renewal news.

5/19/20 update: Last Man Standing has been renewed for a ninth season on FOX.

What do you think? Are you glad that the Last Man Standing TV show has been renewed for a ninth season? How would you feel if FOX had cancelled this TV series, instead?

hate the new Mindy cannot stand to watch. Get the original Mindy back

I am big bummer give second chance last 2 year on FOX impressive top 1 rated two years in a row love show especially Tim Allen is the best comedian awesome bring smile on your face never doubt it, hopefully been other shows something better. Unfortunately ratings high due coronavirus pandemic said effects cast and crew had to ended it for final season such a great show too many comedy no complaints for me.

I LOVE LMS, it’s such a funny show to watch, great cast. I cannot believe the upcoming 9th season will be the last. I feel like its still on ABC in that aspect!! WHY END IT?? WHY?? All the good shows come to an end and the stupid ones don’t. So unhappy it’s ending.

Worst show EVER with this “new” Molly….., 2 Vanessa are far too many…..she is the worst…., EP…….bring Molly home from Fashion school…….send the IDIOT home….she really is the worst …..won’t watch again……simply the worst……we do NOT NEED or want 2 VANESSAS ……….DONE…….DONE