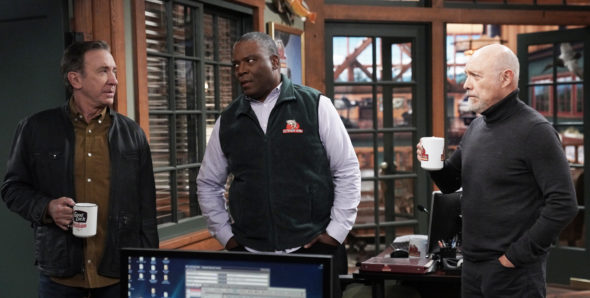 Last year, in Last Man Standing’s first season on FOX, the sitcom got off to a very strong start but the ratings dwindled as the season progressed. Some would argue that cast changes were the cause of the decline. Will the numbers continue to fall in season eight or, will they bounce back? Will Last Man Standing be cancelled or renewed for season nine? Stay tuned.

5/1 update: You can see the latet night’s ratings in context.

For comparisons: Season seven of Last Man Standing on FOX averaged a 1.09 rating in the 18-49 demographic and 5.71 million viewers.

What do you think? Do you like the Last Man Standing TV series on FOX? Should it be cancelled or renewed for a ninth season?

*5/19/20 update: Last Man Standing has been renewed for a ninth season on FOX.

Last Man Standing has changed into a Social Justice format, since hiring King Hassan to write 7 new episodes! The program has lost its humor / fun and changed into guilt and shame!

The new Mandy is worse than terrible doesn’t fit the role at all she needs to be fired asap. The first Mandy was so talented and naturally beautiful like a young Elisabeth Taylor, please get her back at any cost since show is good otherwise. We don’t watch anymore because can’t stand to watch the new Mandy she is the worst,

Last Man Standing is the best comedy on Television Period.

We love the show! Please keep renewing it. Love all the characters, but was really fond of Mandy. She was so funny. Why did she leave?

Love this show!!!!!! New cast is different, miss original Mandy, but love the show and comments and vibe of it!!!