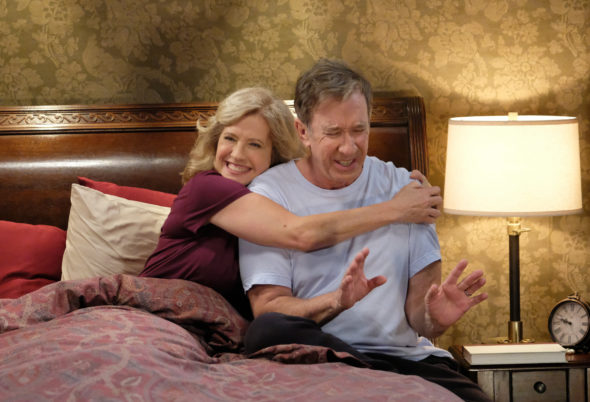 When ABC cancelled Last Man Standing after six seasons in 2017, it looked like that was the end of this comedy series. Then, FOX revived it in 2018. Now, three seasons later, the show is ending once again. Is this truly the end for Last Man Standing or, could the Baxters return for a 10th season or special event someday?  Stay tuned.

A family comedy series, Last Man Standing stars Tim Allen, Nancy Travis, Hector Elizondo, Amanda Fuller, Christoph Sanders, Molly McCook, Jordan Masterson, Jonathan Adams, and Krista Marie Yu. The series revolves around Mike Baxter (Allen), the marketing director of the Outdoor Man sporting goods stores and a “man’s man”. His family doesn’t see eye-to-eye with him so it can sometimes be a little tough for Mike to stand his ground and stay in touch with his inner man. In season nine, the series jumps ahead into the near future. Mike and Vanessa contemplate their own future, including Mike’s imminent retirement from Outdoor Man — and who could be his successor.

5/21 update: You can see the latest night’s ratings in context.

For comparisons: Season eight of Last Man Standing on FOX averaged a 0.74 rating in the 18-49 demographic and 4.25 million viewers.

What do you think? Do you like the Last Man Standing TV series on FOX? Would you have watched a 10th season?

I enjoyed the earlier seasons. Probably toward the middle of season seven I realized I did not like the way that several of the characters were ‘evolving’. Specifically Kyle being called to “the ministry” and the vapidness of Mandy. In addition, the perception of the writers were trying to flog a very dead horse to it’s feet. Why Fox didn’t pull the plug is a mystery. That horse was ever run again.

I was sad at how bad this season is compared to all the previous seasons. Tim even seems to be mailing in his lines. Kristen is the only character getting much time & her lines are boring. Ed’s marriage was cute, now barely mentioned. Eve & Ryan were my favs, Eve’s gone & Ryan seldom seen. Chuck is the only one that ‘s still interesting. Writing was just awful this season, sad it was my favorite show since Fraser.

Out of all of the seasons that they had on Fox I thought that the seventh season was the best one and season 8 was a letdown. This one had a rough start to me and had some good episodes and it went back and forth in quality. And they could’ve done much better with the series Finale.

Loved the show for the whole time. The episode of the truck being stolen and putting in bags just sucks.