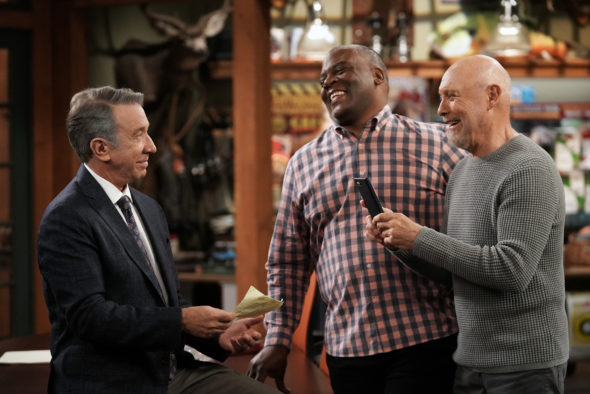 Will Mike truly retire in the ninth season of the Last Man Standing TV show on FOX? As we all know, the Nielsen ratings typically play a big role in determining whether a TV show like Last Man Standing is cancelled or renewed for season 10 (in this case, we know it’s ending). Unfortunately, most of us do not live in Nielsen households. Because many viewers feel frustration when their viewing habits and opinions aren’t considered, we invite you to rate all of the ninth season episodes of Last Man Standing here.

A FOX family comedy series, Last Man Standing stars Tim Allen, Nancy Travis, Hector Elizondo, Amanda Fuller, Christoph Sanders, Molly McCook, Jordan Masterson, Jonathan Adams, and Krista Marie Yu. The series revolves around Mike Baxter (Allen), the marketing director of the Outdoor Man sporting goods stores and a “man’s man”. His family doesn’t see eye-to-eye with him so it can sometimes be a little tough for Mike to stand his ground and stay in touch with his inner man. In season nine, the series jumps ahead into the near future. Mike and Vanessa contemplate their own future, including Mike’s imminent retirement from Outdoor Man — and who could be his successor.

I would love for Last man standing to comeback, but I wouldn’t want to see it give in to today’s moraes.

Please will someone listen to the viewers….ever?! We do not want this Show Cancelled! Tim Allen is very funny and so are all of the cast! They all work together wonderfully and we love the show as a family. Watch it every week. Is there a station out there that can pick up the ‘Last Man Standing’ show? If so, please hurry before the cast members find other places to go. We all know Good shows are hard to find now a days. I am still calling for the show Not to be Cancelled. Thanks for reading all of this… Read more »

Good show. Will miss it. Especially the cast.

I absolutely love this show and all the characters. My giant laugh and love of the week comes from ‘Last Man Standing’ … Devastated it’s dropped. Why do all the great programs get dumped. So few to watch any more.

Tim Allen is great….but don’t care for him in this show…I liked him as Tim “The Toolman” Taylor

Best show on tv. so done with the violence. Great family comedy and interaction. Keep it going!

Consistently the best 22 minute (gosh, there getting shorter, [as are English words]) show on television over the last ten years. Tim Allen is a brilliant master of his craft.

Please renew Last Man Standing. My entire family loves this show. We were so happy Fox picked it up when ABC cancelled its renewal.
We have invested in all the characters and want it to stay on the air and on Fox!!

Love Last Man Standing, look forward to watching it. Big mistake taking it off the air and cancelling the series.

We love Last Man Standing. Sorry to hear it is ending!

My husband love this show. We have watched Tim Allen from way back. We love how he hits on real social issues and is straight up honest about life and every day happenings. Were sad to see the show canceled. Were loosing so many positive “real” role models .

It seems Fox network has chosen to cut as many corners as possible. After waiting for years for Kyle and mandy to be parents, we not only missed out on the delivery, we got a quick peek of a little girl who was supposed to be her and nothing since. Did Ryan and Kristen give Boyd away after having his little sister show up? Do we get to see their kids? Guess it’s much cheaper to buy not hire a cast. For such a great sitcom, they should have put some effort into making the last season amazing. Too much… Read more »

This last season 9 is awful..very boring and disappointing. I loved this show and cannot beleive how drab and missing major characters..where are these Grsndchildren? And the Jen storyline is just a filler..so disappointing. Thought Tim Allen could end with a bang!

Man with no name
Reply to  Vickie P

This is not a great review.
– The show stayed true to its core, the show is about Mr. and Mrs. Baxter, and their children. Then you have the Covid devastation to the industry, and you expect them to cast as many people as possible, and explore new characters after being cancelled and rebooted?
– Last Man Standing is a great example of hilarious entertainment, true family values, patriotism, freedom of expression, and a courage amidst a frail weak influence among society.
– God bless America, and may God bless you child.

Suzanne Rose
Reply to  Man with no name

Please do not cancel Last Man Standing, it is one of the few still left that the whole family can watch. Please!

Jennifer Hart
Reply to  Man with no name

The reasons you mentioned that made it a great show I’m sure are the same reasons it’s being cancelled . We live in a society that no longer exhibits or wants Morals, Values, Patriotism, Equal Freedom of Expression (and Speech) because if there are no consequences, nothing they do is wrong. Being a “Family” show is probably another reason it’s cancelled. They do NOT want families to bond, to stand together, to be there for each other because they are harder to control. We live in a sad world where people no longer care about one another or anything really… Read more »

I agree with many of the viewers, that family, morales, love, children, no drugs, no divorce, no same sex marriage, nothing that the left wants, that’s why this past year left those of us who wanted more of the real Tim Allen, and the genuinely funny banter that goes on in nice families, American families, was missing. We didn’t see the children, the characters weren’t connecting with each other or the audience, it should have had more of their nuclear family and stayed true to their spirit of the story. Please bring it back, but go back to its original… Read more »