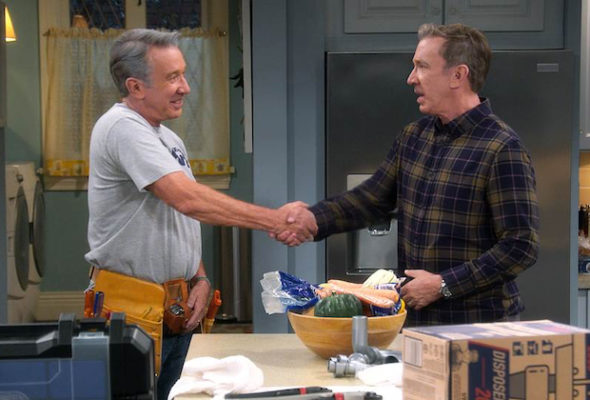 Last Man Standing is getting ready for its ninth and final season on FOX, and a special crossover is set for an episode of the comedy. Viewers will be seeing double when star Tim Allen reprises his Home Improvement character, Tim ‘The Tool Man’ Taylor.

Tim will visit the Baxter house in the episode titled ‘Dual Time.’ Deadline revealed the following about the episode:

“The Baxters see double when Vanessa hires a home improvement repairman (Allen) who bears an uncanny resemblance to Mike (Allen), who is struggling with an idea for his Outdoor Man 10th Anniversary vlog.”

Last Man Standing will premiere its new season on January 3rd, and the ‘Dual Time’ episode will air in its time slot premiere on January 7th. Home Improvement aired for eight seasons on ABC.

Check out a trailer for the final season of the FOX comedy below.

What do you think? Are you a fan of Last Man Standing on FOX? Will you watch the return of Tim Taylor on the series?

I have enjoyed Last Man Standing all these years. I was a loyal follower of the show until a new Mandy was casted. New Mandy looked nothing like the old, always seemed to try to be funny,etc. I would think in casting a new character, you would like to have someone be similar and fit in, which she did not. I watch the reruns every night and wish I could enjoy the final season, but just not the same show

Look forward seeing it awesome and so funny too.

This is a great idea and am really looking forward to this season. I am NOT happy about this being the final season however! I hope Tim Allen comes up with another show and can find a network to have it on. I was a big fan of Home Improvement and was disappointed when it ended.

I love this idea

HeckYEAH I’ll be watching. Every show. Sounds like they really are going to give us the best send-off possible. Can’t wait to see how they bring their previous actors into the stories.

We’ll definitely be watching the season premiere. We were always fans of Home Improvement and still enjoy the reruns of Last Man Standing.