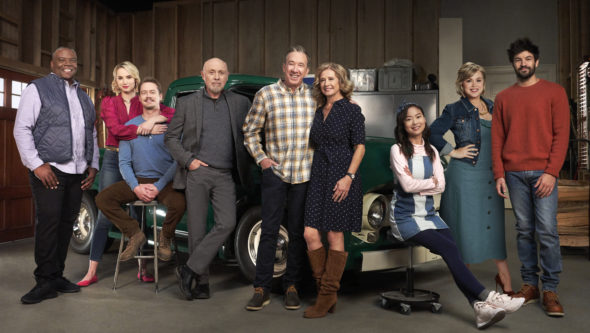 Is this the end for the Baxters? Has the Last Man Standing TV show been cancelled? Renewed for a 10th season on FOX? The television vulture is watching all the latest cancellation and renewal news, so this page is the place to track the status of Last Man Standing. Bookmark it, or subscribe for the latest updates. Remember, the television vulture is watching your shows. Are you?

Airing on the FOX television network, Last Man Standing stars Tim Allen, Nancy Travis, Hector Elizondo, Amanda Fuller, Christoph Sanders, Molly McCook, Jordan Masterson, Jonathan Adams, and Krista Marie Yu. The series revolves around Mike Baxter (Allen), the marketing director of the Outdoor Man sporting goods stores and a “man’s man”. His family doesn’t see eye-to-eye with him so it can sometimes be a little tough for Mike to stand his ground and stay in touch with his inner man. In season nine, the series jumps ahead into the near future. Mike and Vanessa contemplate their own future, including Mike’s imminent retirement from Outdoor Man — and who could be his successor.

The ninth season of Last Man Standing averaged a 0.42 rating in the 18-49 demographic and 2.49 million viewers. Compared to season eight, that’s down by 43% in the demo and down by 41% in viewership. Find out how Last Man Standing stacks up against other FOX TV shows.

We don’t have to wonder if FOX will cancel or renew Last Man Standing for season 10. The network has already announced that season nine is the end. Could the cast reunite for a special or limited series someday? Subscribe for free alerts on Last Man Standing cancellation or renewal news.

What do you think? Are you sorry that the Last Man Standing TV show won’t be renewed for a 10th season? Is season nine a good time to end the show?

Yes I think that Last Man Standing should have a 10th and 11th season.

At least finish it off with season 10 and not leave us all hanging! This show is my most favorite! I don’t understand why big corporations will cancel a perfectly good show and replace it with a really dumb one!

if its not back on the air i will punch creig t nelson. the skillfull acting will surely be missed. i love seeing my wife on stage being cute. dear god you cant stop at 9 atleast go to 10.

I’ve watched everything Tim Allen has done. It’s breaking my heart that it won’t be back, love him, loved the show. Please bring it back.

Hate it. Time to go back to prison for Tim Allen.

love this show rerun after over but so funny really good Tim Allen actor enjoy since The Santa clause movies classics Disney.

Sorry to see them go! Will miss them dearly.