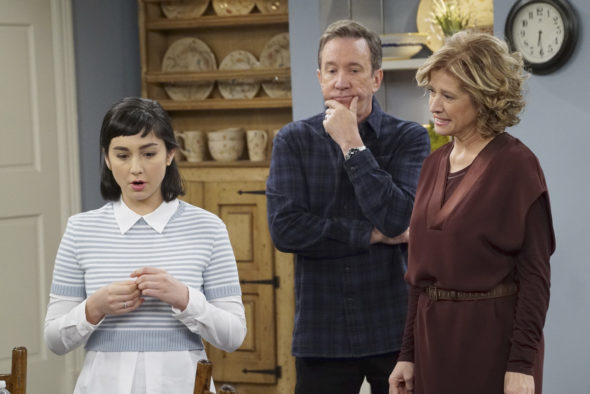 One week shy of a year ago, ABC cancelled Last Man Standing after six seasons of relative Nielsen ratings success. Soon thereafter, ABC entertainment president Channing Dungey did her best to dispel rumors that the comedy was cancelled because of its (or Allen’s) conservative political bent and chalked it up to scheduling challenges. Still, Allen said the cancellation “blindsided” him.

Then an ABC sitcom, Last Man Standing centers on straight-talker Mike Baxter (Tim Allen), a man surrounded by women. While this sporting goods store marketer is high on common sense, Mike is a little low on what some call political correctness and others call manners. The ABC cast also included Nancy Travis, Molly Ephraim, Kaitlyn Dever, Amanda Fuller, Jordan Masterson, Flynn Morrison, Jonathan Adams, Christoph Sanders, and Hector Elizondo. Reportedly, the talks with FOX include the idea of bringing back stars in addition to Allen.

At first, Allen posted a non-specific “stay tuned” tweet to his verified Twitter account. Less than a half an hour later, he gave sufficient detail to rally his audience. Check it out.


They heard all your voices people!! LMS just might be a reality. Keep it up. Who wants more #LastManStanding ?

Last Man Standing Could Be Renewed for Season Seven on FOX

A year after Disney-owned ABC canceled Tim Allen comedy Last Man Standing, Fox is in early talks to revive the multicamera comedy for a seventh season. Allen, sources say, has signed on and has been — with producers 20th Century Fox Television — the driving force of the revival. Discussions are also underway with producers and stars from the former ABC comedy to return. Insiders stress the talks are on the early side and could break down ahead of the network’s May 14 upfront presentation to Madison Avenue ad buyers. Fox and 20th Century Fox Television declined comment.

The Fox studio, where the first six seasons of the comedy were produced, made it known at the time of the cancellation that they would try to find the sitcom new home. Last year, CMT, where Last Man Standing reruns have done quite well in syndication, was in talks to pick up the seventh season. Eventually, the cable network passed on it, reportedly over its price tag.

What do you think? Would you watch a Last Man Standing TV series revival? Do you think the sitcom is a good fit for FOX? Sound off in the comments.

I am extremely happy, ecstatic, that this great comedy is returning!! There is very little entertaining tv shows this Last Man standing is one that his pure entertaining to watch! THANK YOU THANK YOU!

I Firmly Believe That Fox Will Thrive With Last Man Added To Their Line Up Of Shows This Fall,Tim And His TV Cast Are An Extremely Talented Bunch Of Actors,Hope This Will Last Forever On Fox,Please Bring Last Man Back This Fall!!!!!!❤️❤️❤️❤️❤️

Bring it back! What are you waiting for?

Fingers crossed for it’s return. I will be so good to have something that doesn’t pander to the PC crowd.

love to have season 7 of last man standing!!!! please bring it back

LOVING THIS!!!! My husband and I watch last man standing every week night when we get home from work. This was my absolute favorite show on tv. We got both sides of our families to watch and fall in love with the Baxters. The show NEVER should have been cancelled! REALLY REALLY hoping this comes true!

Best entertainment on the tube. Great writers and great actors.

We are all waiting for LMS ‘s return. Best show ever.