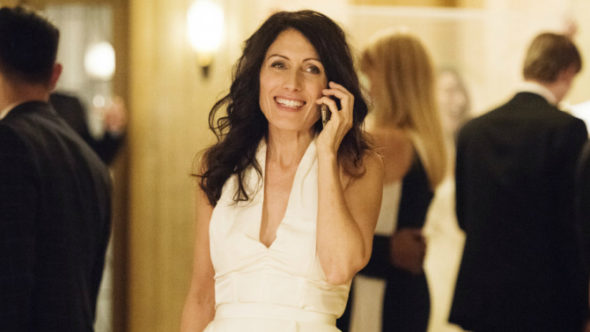 How will Girlfriends’ Guide to Divorce end? Today, Bravo announced the TV show’s fifth and final season will premiere in June.

The fifth and final season of Girlfriends’ Guide to Divorce premieres on Bravo on June 14th at 10 p.m. ET/PT.

NEW YORK – May 3, 2018 – The Girlfriends’ get ready to say their final goodbye as Bravo Media’s first original scripted series “Girlfriends’ Guide to Divorce,” from Universal Cable Productions (UCP), returns on Thursday, June 14 at 10 pm ET/PT for its fifth and final season. Created and executive produced by Marti Noxon, the series follows the close knit friendship of Abby McCarthy (Lisa Edelstein), Phoebe (Beau Garrett), Jo (Alanna Ubach), Delia (Necar Zadegan) and Barbara (Retta) as the ladies embrace the next chapter of their lives and strive to define their own ever after.

This season on “Girlfriends’ Guide to Divorce,” as Abby and the girlfriends each move forward in their lives, they are constantly reminded of their past and ever-intertwined lives with their exes. With Lady Parts finally on stable ground, Abby looks to take her relationship with Mike (James Lesure) to the next level by blending their families, but receives some hesitation from his ex and hers. Barbara allows a not-so-innocent flirtation with a surprising former flame to jeopardize her future with Darrell (Malcolm-Jamal Warner). Phoebe’s life is flipped upside down when her estranged brother Tony (Steve Talley) knocks on her door and she must decide whether to let him back in. She also dips her toe back in the dating game and finds herself unexpectedly drawn to an enigmatic new acquaintance. After taking the pregnancy test, Delia evaluates her relationship with Paul (Ignacio Serrichio) and comes to an unexpected conclusion. Meanwhile, Jo finds that mixing business with pleasure comes with its own side of pros and cons. But the return of Jo’s ex Frumpkis (Maury Sterling) from rehab ultimately tests the strength of her relationship with Albert (Brian Markinson). As the girlfriends each face the future and all of its unknowns, they lean on one another as they pave their own path to happily ever after.

What do you think? Are you a fan of Girlfriends’ Guide to Divorce? How do you want the series to end?