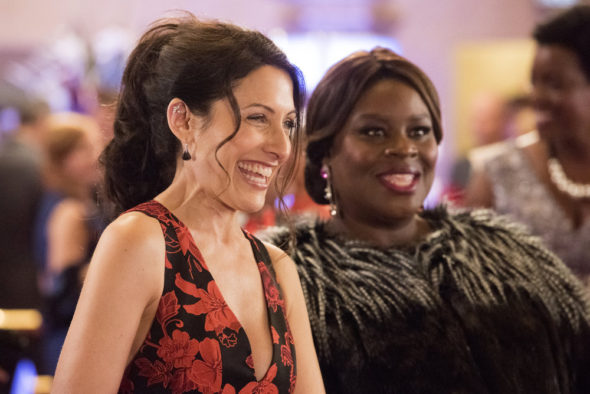 What is in store for Abby and the gang? Has the Girlfriends’ Guide to Divorce TV show been cancelled or renewed for a sixth season on Bravo? The television vulture is watching for the latest cancellation and renewal news, so this page is the place to track the status of Girlfriends’ Guide to Divorce, season six. Bookmark it, or subscribe for the latest updates. Remember, the television vulture is watching your shows. Are you?

A Bravo dramedy, based on the Vicki Iovine book series and developed for television by Marti Noxon, Girlfriends’ Guide to Divorce stars Lisa Edelstein, Alanna Ubach, Beau Garrett, Necar Zadegan, and Retta. Self-help guru Abby McCarthy (Edelstein) shocked the world when she separated from her husband. When her career took a dive, she went in a new direction. In the fifth and final season, as the gang moves forward, they still find their lives are intertwined with those of their exes.

Since this is the fifth and final season, there’s no need to wonder whether Bravo will cancel or renew Girlfriends’ Guide to Divorce for season six. I’m still keeping an eye on the Nielsens, because the ratings are useful to analyzing the performance of other TV shows, so I’ll update this page with developments as well as any news of a spin-off or sequel series. Subscribe for free Girlfriends’ Guide to Divorce alerts.

What do you think? Is the Girlfriends’ Guide to Divorce TV show ending at the right time? If it were up to you, would Bravo cancel or renew this TV series for a sixth season?

It’s all about Lady Parts, we are ladies , we need more.

I would love for this show to continue. It’s great. I don’t want it to end. Great show for us Ladies.

I LOVE LOVE LOVE THIS SHOW!! The characters are amazing and the story line is so relatable!! I laughed with them and cried with them. I haven’t lived anything this much in a very long time. Please please bring it back❤️❤️

I’m so disappointed that they cancel season 6:( I wish they will change their mind.