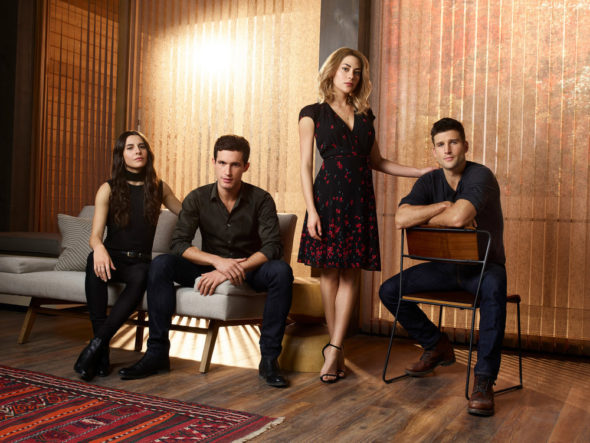 What’s does the future hold for Maddie and the Bumblers? Is the Imposters TV show cancelled or renewed for a third season on Bravo? The television vulture is watching for the latest cancellation and renewal news, so this page is the place to track the status of Imposters, season three. Bookmark it, or subscribe for the latest updates. Remember, the television vulture is watching your shows. Are you?

A Bravo dark comedy, Imposters stars Inbar Lavi, Rob Heaps, Parker Young, Marianne Rendón, Stephen Bishop, and Brian Benben, with Uma Thurman guest starring. It centers on Maddie (Lavi), a beautiful con-artist, and the “Bumblers,” a team of her former victims. In season two, after they all escape Max (Benben) and FBI Agent Patrick (Bishop), Maddie resolves to reclaim her life. She soon realizes playing the game is easier than exiting it. Meanwhile, Ezra (Heaps), Richard (Young), and Jules (Rendón) set off on an impromptu adventure. However, Max, “The Doctor” (Ray Proscia), and Patrick are on a quest for vengeance. Now, Maddie and the Bumblers must scramble to maintain their freedom.

The second season of Imposters averaged a 0.12 rating in the 18-49 demographic and 425,000 viewers. Compared to season one, that’s down by 51% and 43%, respectively. Learn how Imposters stacks up against other Bravo TV shows.

Will Bravo cancel or renew Imposters for season three? The ratings are way, way down. With such dismal ratings, I think it will be cancelled. Of course, it all depends how much that Bravo wants to stay in the original scripted series business. For now, I’ll keep an eye on the Nielsens and update this page with breaking developments. Subscribe for free Imposters cancellation and renewal alerts.

6/1/2018 Status Update: Imposters has been cancelled by Bravo after two seasons. Details here.

What do you think? Do you hope the Imposters TV show will be renewed for season three at another outlet? How would you feel about this Bravo TV series cancellation?

PLEASE BRING IMPOSTERS BACK FOR SEASON 3!!! ITS SO ADDICTING! I CANT GET ENOUGH OF IT!

I hope Netflix picks up additional seasons of Imposters.
All the good shows get cancelled.