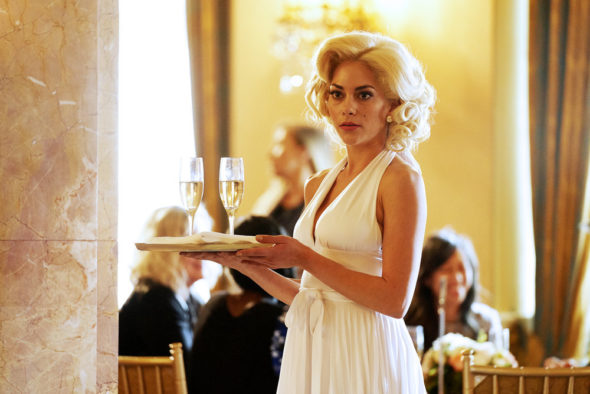 How do Maddie and the Bumblers make out during the second season of the Imposters TV show on Bravo? As we all know, the Nielsen ratings typically play a big role in determining whether a TV show like Imposters is cancelled or renewed for season three. Unfortunately, most of us do not live in Nielsen households. Because many viewers feel frustration when their viewing habits and opinions aren’t considered, we’d like to offer you the chance to rate all of the Imposters season two episodes, below.

A Bravo dark comedy, Imposters stars Inbar Lavi, Rob Heaps, Parker Young, Marianne Rendón, Stephen Bishop, and Brian Benben, with Uma Thurman guest starring. It centers on Maddie (Lavi), a beautiful con-artist, and the “Bumblers,” a team of her former victims. In season two, after they all escape Max (Benben) and FBI Agent Patrick (Bishop), Maddie resolves to reclaim her life. She soon realizes playing the game is easier than exiting it. Meanwhile, Ezra (Heaps), Richard (Young), and Jules (Rendón) set off on an impromptu adventure. However, Max, “The Doctor” (Ray Proscia), and Patrick are on a quest for vengeance. Now, Maddie and the Bumblers must scramble to maintain their freedom. **Status update below.

What do you think? Which season two episodes of the Imposters TV series do you rate as wonderful, terrible, or somewhere between? Should Bravo have cancelled or renewed Imposters for a third season? Don’t forget to vote, and share your thoughts, below.

**6/1/2018 Status Update: Imposters has been cancelled by Bravo after two seasons. Details here.

Imposters is my favorite show, so I sure hope that Bravo reconsiders their decision, or if not, that some other network picks it up. At the very least, can the ratings methodology be reviewed? With the great ending in Episode 10, it is hard to believe that only HALF of the viewers tuned in for Episode 11 and the rest of Season 2.