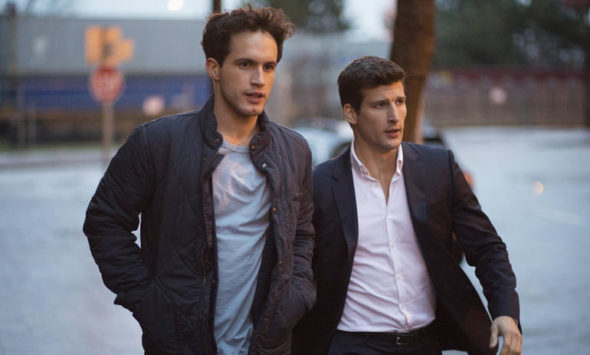 What’s in store for the Imposters series finale? Recently, creators Paul Adelstein and Adam Brooks spoke with TVLine about the end of the Bravo TV show.

The series finale of Imposters airs on Bravo tonight, June 7th, at 10 p.m. ET/PT. Co-creator Paul Adelstein said they didn’t intend the season two finale as a series finale, but there are certain story lines that are resolved:

We had a theme for the season of consequences and what’s next. Because it’s a con show, just like Season 1, everything would build throughout the season [and] hopefully culminate in the finale. I think we did that well here. There’s a very clear through-line, emotionally, for all the characters, and then there are some big questions for them. … We didn’t intend it, obviously, as a series finale, but there are aspects of it that leave us in a place where certain aspects of the story have been resolved. There’s certainly enough out there for the audience’s imagination to wonder what’s going to happen next.”

But will there be closure for fans? Co-creator Adam Brooks says they hope they get the chance to do more episodes in the future to close up all the loose ends:

Like Paul said, it’s not [like] we were imagining this being the [series] finale. But when we looked at it that way, we [were] really happy that it doesn’t end on a certain kind of cliffhanger. That would be very frustrating for the audience. What happens in this finale with the Doctor, it does feel like the end of a certain part of our story. There is a certain kind of closure in all of that. And what’s left open, I think, can leave a lot to your imagination. I just saw the final [episode of The] Americans, where they don’t close every loophole, dot every I, cross the T’s. So I think it was an accident, but it worked out well that way. We hope that makes people want more. We hope that maybe one day, who knows, we’ll get to do more. It works better than we might have thought, given that we weren’t planning for it.”

What do you think? Are you a fan of Imposters? Do you think it deserved a third season?

Please bring Imposters back for Season 3!!

So disappointed this series is leaving us! Netflix is waiting for you Paul and Adam because the fans need more Imposters!!! I just watched the entire 2nd season in two days and need more of the cast and their talents.

I’m so sad and shocked this show was cancelled. It is one of my favorite shows. What a shame, it was so refreshing to see something so different on TV. BIG MISTAKE BRAVO!

So sad to hear of the cancellation. I love love love this show. I waited all year for Imposters to return.
I love every character on the show. There are so many twists and turns that keep it exciting. All the characters are so fun, and funny. This cancellation isn’t so easy peasy for measy. I haven’t watched a TV series since ER. I almost feel let down now and it makes me not want to return back to TV. Oh well, time to find a good book.

I really thought that they would wrap things up but all they have done is leave an open end that leaves us wanting more.

I would love to see a 3rd season of Imposters. There is a lot of garbage shows out there and this one was interesting to watch. Saddened that it was cancelled.

This is actually my favorite show so I’m very sad that it has been cancelled.

So sad this series is being cancelled …. I hope the season/series finale answer all our questions and don’t leave the viewers hanging.

I would love to see a third season!!! We record this show and watch them at a later time. We are now trying to save them so it’s not over for us…..:(