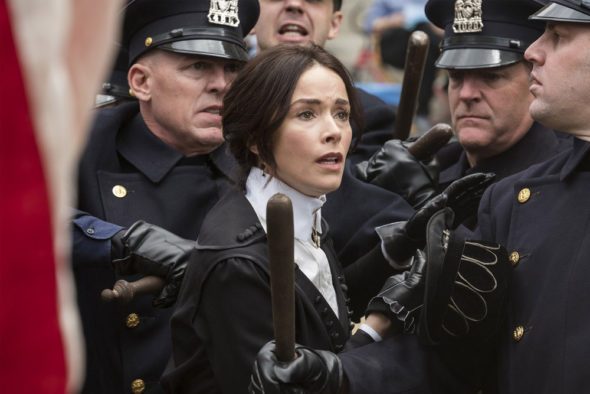 Will there be another season of Timeless? The creator and writers of the NBC TV show are encouraging fans to campaign for a season three renewal.

The time travel drama follows the unexpected team of a history professor (Abigail Spencer), a soldier (Matt Lanter), and a scientist (Malcolm Barrett) as they embark on the adventure of a lifetime to stop a mysterious villain. The cast also includes Goran Visnjic, Paterson Joseph, Sakina Jaffrey, and Claudia Doumit

On Twitter, the writers of Timeless and creator Eric Kripke are releasing behind-the-scenes and deleted material from the NBC series to encourage fans to campaign for a season three renewal:

MORE #RenewTimeless BTS! First drafts of Lifeboat & Mothership. (Notice the WALL-E, Eve designs). We wanted them to resemble NASA capsules. Felt real to us. But NBC asked for more style, so we came up with the ships you know & love! #Clockblockers @TheTimelessRoom @NBCTimeless pic.twitter.com/zkLNSTPloh

More #RenewTimeless BTS. The designs we signed off on. As we built, we made more tweaks: lost the support bars, added landing skids, changed the Mothership doors. (Notice we called the show 'Time'). Thanks @ChrisFParnell for these! #Clockblockers @TheTimelessRoom @NBCTimeless pic.twitter.com/Ph6udaMOhS

Yes, now that we've run out of deleted scenes, we'll be releasing new script page/s each day until we know our fate. Let us know what you'd like to see. Use the hashtags #RenewTimeless and #TimelessPages to register your request.

Thanks for waiting everyone! Since we were late getting this out, we won't require an amount of retweets to post. Just make sure you keep hitting up social media with your #RenewTimeless requests! Enjoy. pic.twitter.com/yZMUvEgy59

Script Pages: So it seems like we've stumbled into some ship wars, but that's not how we view things in our writers room. We love all our characters and just want to be true to them and see where that takes us. So, (if you want to) enjoy this Lucy/Flynn scene. #OneTimeless pic.twitter.com/XJReKcahDp

What do you think? Are you a fan of Timeless? Do you want a third season?

Great show, barely got started, all of history for creative inspiration and an absolute joy to watch! Might benefit from some added wit/humor but certainly fun and intriguing as is! So many shows all alike and boring, this has a unique and wonderful story to tell, ethical implications of time travel from a fresh bright perspective, well developed characters and amazing sets, costumes… give it a chance! A breath of fresh air in television, tragic to cancel!

I really like this show. This will be my first attempt at something like this. Please renew this show. I have watched every episode and looked forward to new shows. The cast is great and the writing is the best on tv right now. Please renew.

Do not. Cancel timeless my favorite. Great actors an more importantly good plot compassion and decency, not to mention history of real events and times. Keep good shows with decency on these are great actors and writersR

Anywhere I can, I will be clamoring for season 3!

I love the show! Please keep it going!

Please, please, please renew Timeless! A movie would be fabulous in addition to another season. My son, who has autism has enjoyed this show so much! He loves history and every show has him on the edge of his seat. It can’t end here!

My husband & I loved Timeless so much that we watched it in real time (instead of recording it & fast forwarding thru the commercials). It is One of the few shows we watch together because it combines a bit of history (for me) & science fiction (for him). We surely would love an ending to the cliff-hanger and would definitely attend a movie wrapping things up. But, more importantly, I wish it were not cancelled!!

Timeless is such a great show. I asked my students to watch episodes and research historic timelines used in the series. Can’t believe NBC would cut the show.
Please bring it back.