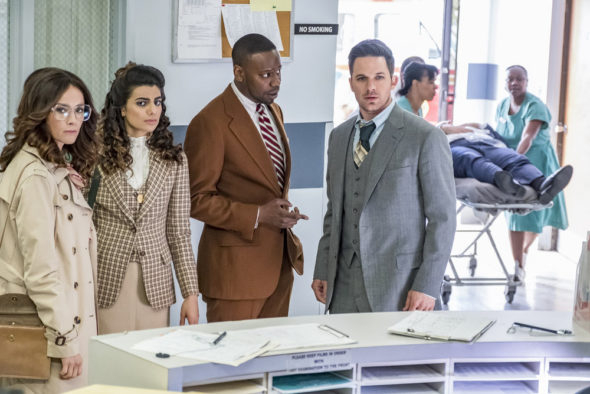 Is Timeless endless, or just is that just its cancellation? Executive producer Shawn Ryan, who co-created the cancelled Timeless TV show with Eric Kripke, announced there will be no third season coming to a network, or streaming platform near you. Sony Pictures Television, which produced the first two seasons of the NBC time-travel series, informed Kripke and Ryan that it had exhausted all possible avenues for a season three pickup, and now their options on the cast have expired. The one bright spot is that Sony and NBC are still negotiating over a possible Timeless movie to wrap up the excruciating cliffhanger that was the season two finale. However, given the costs associated with restarting production, there’s not a lot of financial incentive for either the network or the studio, so it’s not a given.

An NBC action-adventure series, Timeless stars Abigail Spencer, Matt Lanter, Malcolm Barrett, Goran Višnjić, Paterson Joseph, Sakina Jaffrey, and Claudia Doumit. As the Time Team, their mission is to prevent the destruction of our world as we know it, by villains who are intent on messing with the timeline. Susanna Thompson, Annie Wersching, and Michael Rady recur in season two as members of the nemesis organization, Rittenhouse. NBC officially cancelled Timeless last month. SPOILER WARNING: SPOILERS FOR THE TIMELESS SEASON TWO FINALE, BELOW. 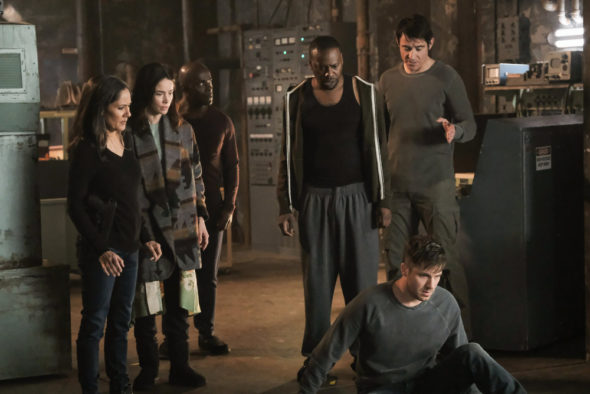 Fans have been lobbying hard for a Timeless season three renewal, in part, because it’s such a good show, but also, because it ended on that terrible cliffhanger.

SPOILERS! During the season two finale, while on assignment in the past, Rufus (Barrett) is killed. In the episode’s final scene, the remaining Time Team — Lucy Preston (Spencer), Wyatt Logan (Lanter), Garcia Flynn (Višnjić), Jiya (Doumit), Denise Christopher (Jaffrey) and Connor Mason (Joseph), are more than stunned when future versions of Lucy and Wyatt arrive in a zooped-up version of the Lifeboat time machine asking, “You guys want to get Rufus back, or what?”

As Kripke indicated when the Timeless cancellation was finally confirmed by NBC, a movie remains the best chance for fans to get some closure (and to #SaveRufus). Check out these tweets from Ryan, and from the Timeless Writers’ Room.


1. @SPTV has notified @TheRealKripke and me that efforts to land #Timeless at another network have sadly failed. While Sony will continue to look at any and all options, actor deals have expired and it appears there will be no Season 3 or beyond.


2. Discussions still take place between @SPTV and @NBC about a possible 2 hour movie to conclude the #Timeless story, but there are considerable economic obstacles that make it an uncertainty. We will update you when we know more.


3. @TheRealKripke, me, the cast, writers & crew of #Timeless want to send our immense thanks and gratitude to all the #ClockBlockers who fought so hard for this show. You made a second season possible and gave us hope for a Season 3. We wish the news was better. We love you all.

Despite Ryan’s update, some #Clockblockers (the Timeless fandom’s self-identifier) were still contacting Amazon and asking the streaming platform to save Timeless like it did The Expanse. Because customer service reps hadn’t been apprised of Amazon’s official decision to pass on picking up Timeless season three, that gave fans the idea that there was some hope, at least until Ryan set the matter straight.


Perhaps the customer service department hasn’t gotten the word yet but we received definitive news from Amazon leadership that they won’t be picking up the show.

In response to questions about whether or not fans could expect closure in any other form, Ryan suggested taking the week to see if Sony and NBC make any headway on their movie talks.


Lets take this week to see if the movie happens, and if not, then we’ll deal with that question. Thanks for your fandom. https://t.co/7xjkTf6ymC

Whoever is manning the official Timeless writers’ Twitter account also made an effort to spread the word that the show wouldn’t end up on another outlet, like Netflix.


Unfortunately, Sony has investigated all the streaming outlets as well and could not make a deal. #Timeless https://t.co/hyyhzUA8Zr


It is an expensive show to make and most networks want to spend their money on new shows. There are some exceptions, but we weren't one of them at the end of the day. #Timeless https://t.co/2MxedKfwBN

They also made sure to thank the fans.


It's fans like you that made this show fun for us to make. Thanks so much. We'll see about the 2 hour movie possibility or maybe a wider audience catches up with the show in future years and creates a revival opportunity then. #TImeless https://t.co/8Fo9v4cRh6

What do you think? Are you still holding out hope for a movie to serve as a real Timeless TV series finale? Since Timeless was previously cancelled after its first season, and ratings were low in the second, do you think the writers should have avoided a big cliffhanger for the season two finale? Sound off, in the comments.

It is truly mind-boggling that NBC cancelled this and renewed a lot of the crap that they did. Timeless was a truly unique and innovative show that would have thrived in a different time-slot. A little advertisement would have gone a long was as well. If all we can hope for now is a movie, I’ll take it. But, please, leave the possibility of a return in the script, because I refuse to believe that some entity won’t want to bring it back at some point. All you have to do is watch it to recognize the quality and possibilities.… Read more »

Would really appreciate a move to wrap things up…………please?

Here is another great show that is not in the interest of executives and their agenda to the top. They moved times and days instead of keeping people included. I stopped watching all major networks get Netflix and CW they keep there shows and right them to pick up the shows you like. They try to do as much as they can for there customer base because they care.

Bring the show back!!

A 2- hour telefilm meant for ad-supported broadcast would mean the actual running time of about 82-85 minutes for the script, which is certainly far better than no film at all but perhaps not enough to wrap up everything without it seeming slapdash and rushed.

Please do a movie! The quality of Timeless has been outstanding! From the filming to the acting and everything in between. I am beyond sad to see it end. Hoping someone who can fund this will either reboot the series but at the very least make a movie to close the show. Their is very little good television and this is a show I looked forward to each week.

I don’t understand why this show was cancelled. I ranked among the network’s highest performing shows and it was totally different than any other show on any other network. We at least need closure – can’t have a cliffhanger like this one and not see who went over the cliff and who didn’t!! Bring it back!!!

I realize that there is so much that goes on behind the screens that the general public has no idea what it takes 2 get a show on the air. However I do know Timeless was a great show. Every episode I felt I had actually gone back in time to see history made. I learn things history classes in school never taught us, made it more real than reading a history book. Unfortunately the 10pm time slot wasn’t going 2 help the ratings of Timeless, but for me, I enjoyed this show so much, I made an effort 2… Read more »