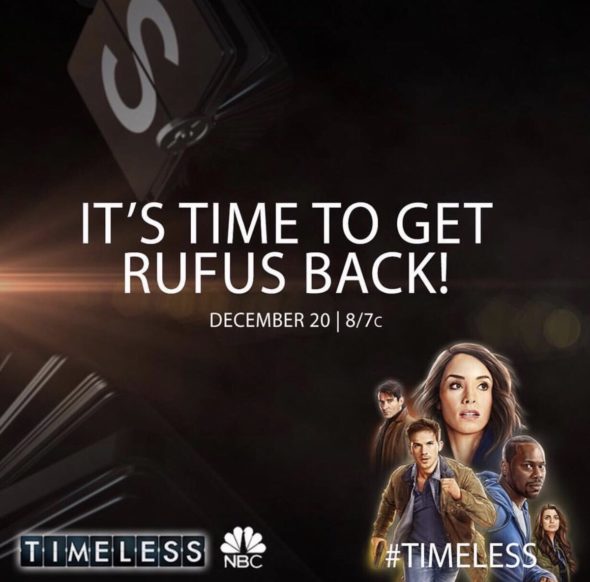 It’s almost time to save Rufus. NBC has announced that their two-hour finale for the Timeless series will air on Thursday, December 20th, at 8:00 PM. Here’s press information from the peacock network:

· “Timeless” executive producers Eric Kripke, Shawn Ryan and Arika Lisanne Mittman are promising fans an epic, unforgettable thrill ride through the past, present and future, with a healthy dose of Christmas spirit. Spread across three centuries and two continents, the finale will test Lucy, Wyatt and the entire Time Team like never before as they try to #SaveRufus, preserve history and put a stop to Rittenhouse once and for all.

Hey, my beloved #ClockBlockers, I got big news. Grab your stash of #Chocodiles and get ready cause we're coming back on December 20th 8/7c on NBC! #Timeless
See, Mama Christopher is getting all spruced up for the occasion. pic.twitter.com/XGUHw6w9Un

You did it #ClockBlockers! We'll see you on Thursday December, 20th as we try tog et Rufus back! Spread the word, build the fanbase and let's make this a big Christmas Party! #Timeless https://t.co/GWfyHbgmc7

What do you think? Will you be tuning in for the final two episodes of Timeless on NBC? Are you still hoping that Timeless will continue elsewhere?

Why can’t they just leave a good thing (“Timeless”) alone ??

TV networks have really done a horrible job since streaming began. If they dont get their proprer rating counts from all available platforms, they are going to end up with a bunch of horrible or stupid shows. This goes for every network, they all do the same thing. Sad and makes for a very boring winter when u find out the sgows u love to watch get cancelled. i lost count of the shows from last year i liked that are gone this year. Also, i think we have enough singing shows for a while.

I really agree with this I work all hours and days I don’t get to see my favorite show when they first air so I go to hulu or other apps where I can watch as soon as I can .they dont show reruns any more so if it wasn’t for streaming I would miss all the good and there is not too many good tv anymore

The fans and Sony (the production company) are still fighting for a 3rd season of Timeless on another network or streaming service. Don’t give up now! Watch on Hulu, get family, friends, co-workers etc etc to watch/catch up so everyone can watch the 2 new episodes on NBC. Want to join us? Check out http://www.savetimeless.com for more info, and make sure to follow the #SaveTimeless campaign on social media (links on the website) for updates. Also, please follow the official #Timeless accounts on social media. Now that Sony is in charge of them (they took over from NBC a couple… Read more »

Unbelievable, can’t wait for the “special” 2 Hr. season finale!!! From what I read from the press releases it going to be EPIC! Thank you NBC 🙂
More to come? LOL Wishful thinking.

Yes I still want a network to pick up the show bUT I cant wait to see 2 hour far well. The show is great

I wish they wouldn’t have cancelled the show. 🙁

Really love this show. History lesson in a sci-fi series

Fun & Educational. Bring it back!

DVR is counted, but only for Nielsen households. But still, there’re a lot of other ways to watch shows that don’t count towards Nielsen ratings.

I think NBC is really stupid to cancel Timeless…. I have hardly any shows to watch.

Looking forward to it. Really enjoyed this show!

Really like and enjoy this show. Hopefully, the network will decide to continue with another season.

Can’t wait! I’ve always liked this show…..great acting, fantastic, smart writing. I still have hope someone will pick up this show!

Thrilled about the 2 hour finale but still bittersweet that we’re not getting a S3 (*sad face*) l. I will never understand NBC’s decision to cancel such an amazing show, still hoping for a pick-up by another network.