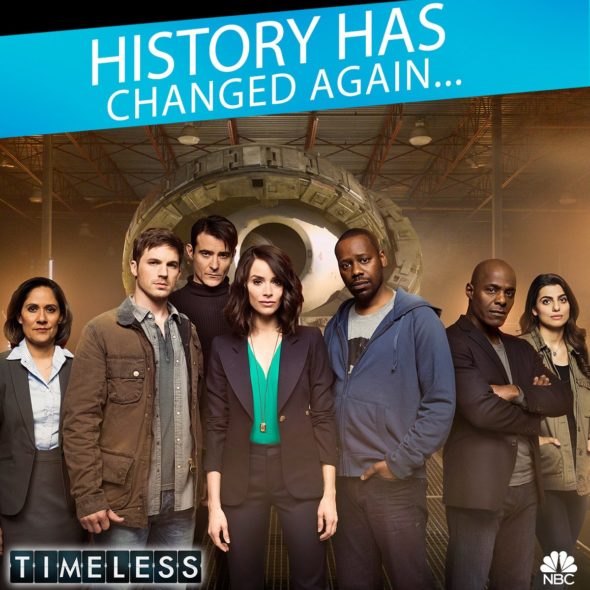 You guys wanna get Rufus back, or what? NBC, which cancelled its Timeless TV show in the wake of an enormous season two finale cliffhanger, is bringing back the Lifeboat for one more trip through time. The Peacock Network announced today that it has ordered a two-part Timeless TV series finale, which is expected to air during the winter holidays. The #Clockblockers have prevailed against the malign forces of Rittenhouse, if in a smaller way than most had hoped.

An NBC action-adventure series, Timeless stars Abigail Spencer, Matt Lanter, Malcolm Barrett, Goran Višnjić, Paterson Joseph, Sakina Jaffrey, and Claudia Doumit. As the Time Team, their mission is to prevent the destruction of the world as we know it, by villains intent upon messing with the timeline. Susanna Thompson, Annie Wersching, and Michael Rady recur in season two as members of the nemesis organization, Rittenhouse. NBC officially cancelled Timeless last month. And that was the second cancellation. The time travel drama was also cancelled, then renewed following its first season on the network.

Fans, who style themselves “#Clockblockers,” have been rallying hard for a continuation of the Eric Kripke-Shawn Ryan drama, since prior to the season two finale. Recently, the Save Timeless team hired a helicopter (or ‘heliclockter’) to fly a banner over San Diego Comic-Con. (Footage is sideways.)

Learn more about the Timeless two-part series finale, from this NBC press release.

NBC and Sony Pictures Television are collaborating on a two-part “Timeless” finale to air during the holidays, giving closure to the globetrotting series that has generated incredible viewer passion.

According to executive producers Shawn Ryan and Eric Kripke, audiences can expect the “Timeless” they know and love. A focus on the unsung and underrepresented people of history. And most importantly, one final emotional story for the Time Team.

“We’re excited to tell one final chapter to this incredible story,” said Lisa Katz, Co-President, Scripted Programming, NBC Entertainment. “A huge thank you to all – our cast, crew, producers and partners at Sony – who have worked so very hard, and to the fans who kept us on our toes and made sure we did our very best week after week.”

“While we wish we could’ve made another dozen seasons of ‘Timeless,’ this is the next best thing,” said Ryan and Kripke. “We’re thrilled to take the Lifeboat out for one last spin and bring closure to our story. The studio, network, cast and crew are all doing this for one reason only: the fans. Because they deserve it. Because the fans made this happen and we thank them for their passion, support and helicopters. So? You guys want to get Rufus back or what?”

What do you think? Will you watch the Timeless TV series finale, this winter, on NBC? Will that be enough? Let us know, below.

yes I watched with sadness in my heart

Of course I’ll watch and NO it isn’t enough. I want more. I can’t believe these really good shows get the ax and stupid ones continue to run. NOT FAIR.

They always cancel the best shows

Yes I will be watching and NO this is not enough. First Grimm, now Timeless. Who is making all these wrong decisions!?

I will definitely watch it

I will definitely be watching the series finale and no that will not be enough!