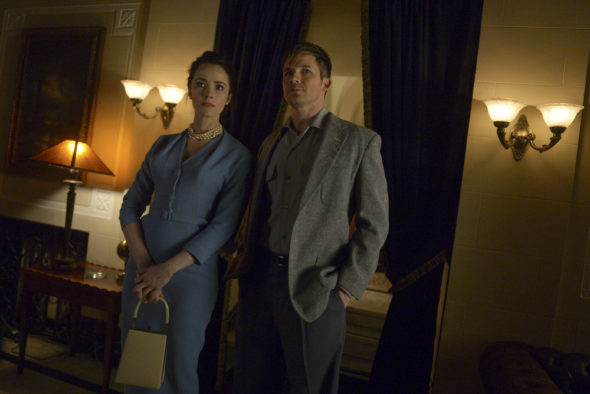 Cancellation cancelled! Earlier this week, NBC cancelled Eric Kripke and Shawn Ryan’s Timeless TV show, but now the Peacock Network has reversed its decision and renewed Timeless for a second season of 10 episodes.

Kripke and Ryan tweeted up a storm about the Timeless renewal, this morning. Check it out.

I hear something strange. A rush of wind. A sonic boom. What is that?

The #TimeTeam went back 3 days, and changed history. @nbc picked us up for 10 episodes. Seriously. Airs next summer. #TimelessRenewed pic.twitter.com/SDkeShlByL

So huge thanks to @nbc for supporting us. And THANKS for the fan support. It's a MAJOR reason we're back. It worked, guys! #TimelessRenewed

True props to Bob Greenblatt, Jen Salke and everyone at @NBC who pulled some serious Brandon Tartikoff shit with this decision! #Timeless

Correction. Info moving fast. We're airing sometime in 2018, not sure when. But we're airing! #ResuscitateTimeless https://t.co/ApuV5KRWxl

When all delayed viewing is considered. we were the 4th highest rated scripted series on NBC this year. #Timeless https://t.co/dniYKr7Ox6

We're coming back for more. #Timeless returns for Season 2 on @NBC. pic.twitter.com/2fi5WPrso0

THR reports that although at one point, Kripke said Timeless, season two, would air in the summer of 2018, it is possible the 10-episode installment could return in spring, instead.

What do you think? Did you watch the first season of the Timeless TV show? Are you happy NBC reversed its decision to cancel it, and picked up season two, instead? Let us know, below.

I really enjoyed the show let’s Keep it coming.

Love History. Loved the show. Kids these days need to learn about history and what makes this country great.

Loved the show. It was one of the few, very few, bright spots on network TV.

Very good decision. This is a clean and fabulous show. And I would like Last Man Standing to remain standing too! Wish ABC would have a change of heart.

I love this show! I hope they don’t cancel it!

I love timeless. It is a great way to review history and enjoy a tv show at the same time. Reminds me of watching Quantum leap growing up.

Sooo excited, just finished watching season one,then shock horror no season two,started looking found this info thank goodness,don’t forget British TVs one of the best made series I have seen in a while!

Great show . Glad to see it coming back.