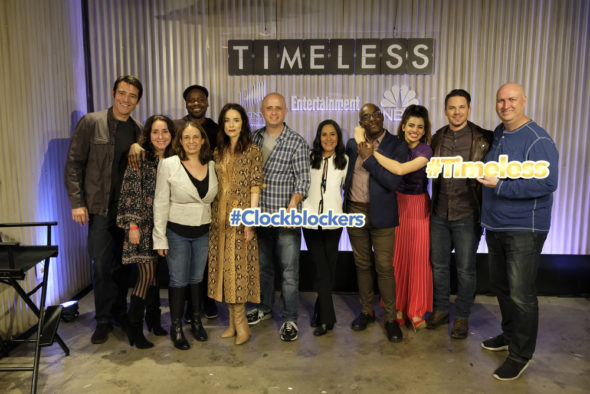 No, #Clockblockers. You didn’t accidentally take the Lifeboat back to last spring. It is May of 2018, yet the Timeless TV show on NBC could be cancelled — again and much more permanently. Still, executive producers and co-creators Eric Kripke and Shawn Ryan aren’t about to let Rittenhouse make catastrophic changes to the television timeline — at least not without a fight. Today, Kripke released a letter (below) explaining why Timeless is on the cancellation/renewal “bubble,” and that it is time for fans to do the most important thing — watch live — when Timeless airs on NBC.

Your assignment: Watch the May 6th episode, “The Day Reagan Was Shot,” at 10:00pm ET/PT, during the NBC broadcast. Kripke also revealed the season two finale (which we hope isn’t the Timeless TV series finale), will air earlier — on Sunday, May 13th at 9:00pm ET/PT, to accommodate the two-hour episode and gage its Nielsen ratings performance in a more family-friendly timeslot. Watch that when it airs, too. The two-part second season finale installments are entitled “The General” and “Chinatown” (check out all three episode descriptions, after Kripke’s letter).

An NBC action adventure drama, Timeless stars Abigail Spencer, Matt Lanter, Malcolm Barrett, Goran Višnjić, Paterson Joseph, Sakina Jaffrey, and Claudia Doumit. Season two follows Rufus (Barrett), Wyatt (Lanter), and Lucy (Spencer) on their quest to prevent the destruction of our world as we know it. Now they’re working with, instead of against Flynn (Višnjić), despite their misgivings.

The second season of Timeless is averaging a 0.62 rating in the 18-49 demographic and 2.59 million viewers. Compared to season one, that’s down by 43% and 44%, respectively. Find out how Timeless stacks up against other NBC TV shows.

Although Kripke’s letter doesn’t mention it, in addition to watching live during the network broadcast, watching on NBC.com, the NBC app, or On-Demand (with commercials) also helps. The most important thing to do is watch live, however. If you tweet as you watch the episode, use the hashtags #Timeless and #RenewTimeless to help it trend. Nielsen also does social media reporting.

We’ve also uploaded the letter directly, in case your workplace blocks Twitter, or you have other problems viewing it. Check it out. 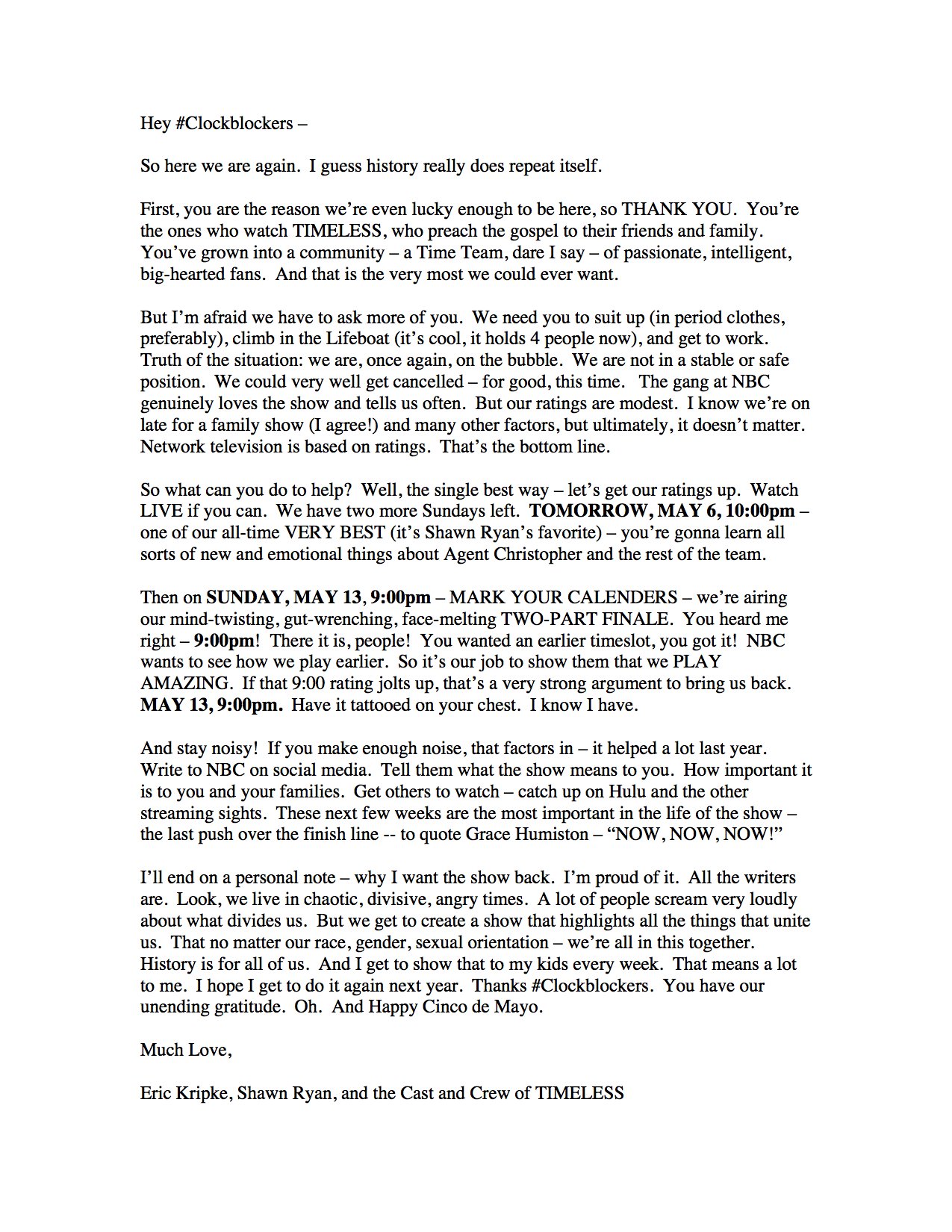 [TIP: If it’s still too small, right-click and open the image in a new window or tab, then increase the size.] 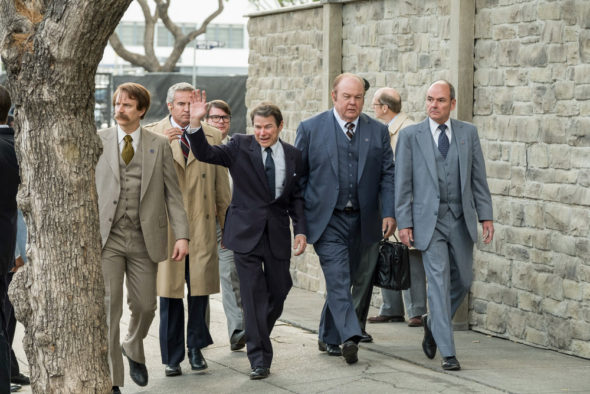 The Time Team travels back to 1981 Washington D.C. on the day President Reagan was shot, only to discover that the Sleeper’s target isn’t the President – but a young rookie police office – none other than Agent Christopher (Sakina Jaffrey), who brought the time team together and kept the Lifeboat from getting into Rittenhouse’s hands. The Time Team must save Agent Christopher’s life and prevent her from making a mistake that set her on a different path that would forever change her own future, the future of the team — and the future of the world. 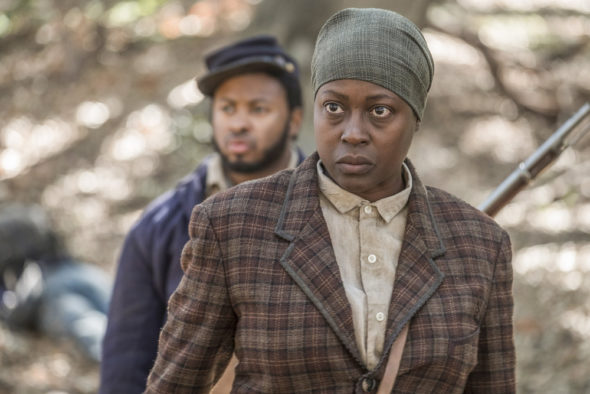 “The General” When the Mothership jumps to South Carolina in 1863, the Time Team partners up with a courageous Union spy and military leader, Harriet Tubman – AKA “The General” – to thwart Rittenhouse’s plan to alter the outcome of the Civil War. Back in the present, Rittenhouse hits the team where it hurts the most.

“Chinatown” SEASON FINALE – When Jiya (Claudia Doumit) makes a daring escape from Rittenhouse that strands her in San Francisco’s Chinatown in 1888 with no way home, the fractured Time Team goes back to save her in this emotional and action-packed finale that leaves the team questioning everything.

What do you think? Should NBC cancel or renew Timeless for a third season? Let us know below.

Please don’t cancel this great show! We watch it on Hulu!

PLEASE RENEW!!!!! This is the best show out there!!!! Do you take into account those who record and watch later? I watch this show with friends and cocktails and therefore, can’t always watch live.
This show must be renewed!

Please don’t cancel Timeless. It is a well done, creative show, that deserves to stay!

PLEASE DONT CANCEL TIMELESS! It is one of the best shows on television in a long time: there is nothing quite like it which makes it so special. please dont let us down and renew it for season 3!

Timeless: It debuted well, but soon got old & tired, you can let it go and try something else. Thanks!

Please renew Timeless. It is a fun show to watch, action and adventure abound. It is an informative show that introduces history to many people who never knew. Those who haven’t learned history now learn through a fun format that challenges them to learn more. I think it is a necessary show I love history but have been challenged by it. Please keep Timeless.

Please don’t cancel this show. Grounded in some history and given some wings of fantasy, it’s fun and fascinating that always leaves you asking “what was it really like then?” Please work it out!