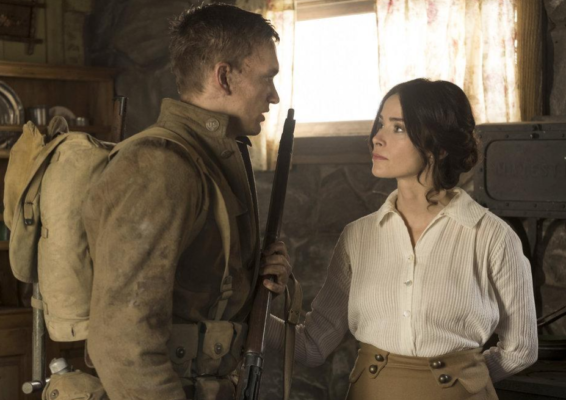 Are you a fan of Timeless? Recently, the NBC TV show’s writers announced a new campaign to thank fans for their support.

The time travel drama follows the unexpected team of a history professor (Abigail Spencer), a soldier (Matt Lanter), and a scientist (Malcolm Barrett) as they embark on the adventure of a lifetime to stop a mysterious villain. The cast also includes Goran Visnjic, Paterson Joseph, Sakina Jaffrey, and Claudia Doumit.

On Twitter, the writers of Timeless announced they will release deleted scenes from the show’s first two seasons if fans get #RenewTimeless trending. As of reporting, NBC has yet to renew the series for a third season.

As we all wait on a #RenewTimeless decision, we're toying with releasing some deleted scenes from the first two seasons for your enjoyment. 5,000 Likes and 2,500 retweets of this tweet will unlock the first one. Also: Let's get #RenewTimeless trending!

You all got to those 5,000 likes and 2,500 retweets quicker than we thought you would! Working with our post department to get clips and clear music so that we can start posting deleted scenes quickly. Thanks #ClockBlockers!

Actually, we're posting two deleted scenes today, but they would have aired back to back. These are from #203, our Hollywoodland ep. Originally the sleeper's dad stayed in the story, but we had to cut this sequence for time. #RenewTimeless pic.twitter.com/I63PFWqXSe

Here's today's deleted scene. From our Salem episode. We wanted to show our new Time Team stealing clothes, but @malcolmbarrett's performance made the scene unusable (actually we had to cut for time and wanted to open on a more serious tone with Proctor's Ledge). #RenewTimeless pic.twitter.com/wdufEoXkGh

Today's deleted scene was cut to make time & also because we worried it advanced the #Lyatt romance too quickly before events of the next two eps. Sweet scene near end of #201 of Wyatt w/an exhausted Lucy after safely getting her back home. #RenewTimeless pic.twitter.com/g8t0zawKrk

Thanks #ClockBlockers for your continued support and advocacy for the #RenewTimeless movement. Here's today's deleted scene as your reward. Keep tweeting and supporting the show! pic.twitter.com/HieGWwGYSA

Hey #ClockBlockers! We hope you're enjoying these deleted scenes. Please keep pounding social media with your desire to #RenewTimeless! Important people are watching and listening.

What do you think? Do you watch Timeless? Do you want a third season?

Should we open crowdfunding campaign? and tweet to writers and NBC? May be pitch it to History Channel or something? I think we gotta do something for sure…

I’m a huge fan of the show, and you can’t just leave us hanging after the way the Season 2 finale ended. Liked the new look of the future selves of Wyatt and Lucy. They are seasoned and confident.
The show also teaches history from a very creative perspective, as well as teminding us of the impact of life choices.
Someone once said, “all we can control is what we choose to do with our time.” Or do we?!

Please renewtimeless!!! It’s the best show on TV right now, and I watch A LOT of tv.

Renew Timeless – simple. Where else can you watch a fun, educational, family friendly, diverse show, with diverse crew & cast, that highlights history at it’s best and worst, on your TV’s? No where. NBC are fools if they don’t renew Timeless, and quickly.

Please renew TIMELESS. I dont have twitter! Thank you in advance!