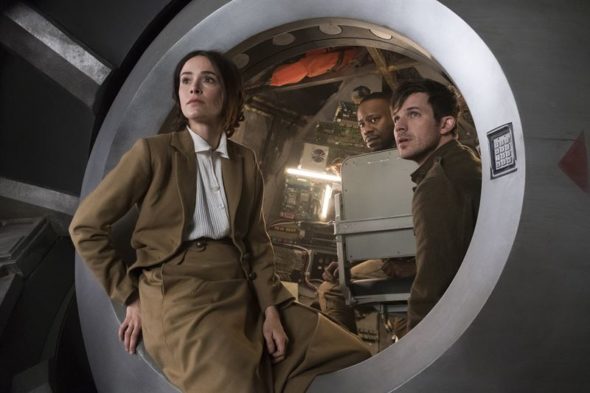 It’s about time, NBC. Fans have been waiting and waiting for the peacock network to announced the premiere date for the second season of their (cancelled and uncancelled) Timeless TV show. Season two will launch on Sunday, March 11, 2018, at 10 pm. The launch will be preceded by a three hour special called American Ninja Warrior: USA Vs. the World. NBC has ordered just 10 episodes of Timeless this time around.

Here’s the NBC announcement about the Timeless premiere and the American Ninja Warrior special:

As previously announced, family viewing continues Sunday, March 18 with the second-season premiere of the hit alternative series “Little Big Shots,” hosted by Steve Harvey, and the debut of the Neil Patrick Harris-led gameshow “Genius Junior.” That will be followed by “Timeless,” whose 10-episode season will air each week at 10 p.m. Sundays.

Last year’s telecast of “American Ninja Warrior: USA Vs. the World” ranked as the #1 non-sports-related show of the night on the broadcast networks in adults 18-49 and in “live plus seven day” figures, the special rose to a 1.4 rating in 18-49 and 5.1 million viewers overall.

ABOUT “AMERICAN NINJA WARRIOR: USA VS. THE WORLD”
Only two weeks following the conclusion of the Winter Olympics, this special will once again bring athletes from around the globe together for intense competition. Four teams from North America, Europe, Latin America and Asia will battle on the tough, four-stage national finals course featured in “American Ninja Warrior.”

Team USA features impressive veteran ninjas Drew Drechsel and “The Weatherman” Joe Moravsky. A speedy competitor, Drechsel has qualified for the finals in Las Vegas five times and made it to Stage 3 two times. Five-time competitor Moravsky has made it to Stage 3 on the Las Vegas finals course three times, more than any other athlete in the competition. Also joining Team USA this year are former nationally ranked gymnast and head coach/trainer Najee “The Phoenix” Richardson and Sean Bryan, the “Papal Ninja.” Bryan is also a former competitive gymnast and NCAA athlete who enjoyed a breakout season on “American Ninja Warrior” this past summer.

Contestants will tackle “American Ninja Warrior’s” punishing Las Vegas finals course in a head-to-head format that pits members from each team against one another.

ABOUT “TIMELESS”
From Eric Kripke (“Revolution,” “Supernatural”) and Shawn Ryan (“The Shield”), season two of this thrilling action-adventure series will pick up right where we left off with our heroes. We continue to race throughout history with our beloved team: Rufus (Malcolm Barrett), a scientist; Wyatt (Matt Lanter), a soldier; and Lucy (Abigail Spencer), a history professor, in an attempt to prevent the destruction of our world as we all know it. This season they’ll find an unlikely ally in their quest to ruin Rittenhouse, a deadly organization with plans to change history and reshape reality — even though Lucy’s family has been a part of Rittenhouse for centuries. Still making every effort not to affect the past themselves, they will visit 1692, 1917, 1941, 1981 and more. We’ll be introduced to the likes of Marie Curie, Hedy Lamarr, William Randolph Hearst and a multitude of other influential people throughout history.

What do you think? Are you planning to watch the second season premiere of Timeless on NBC? Do you think Timeless will do well in the Sundays at 10 pm timeslot? Do you plan to check out the American Ninja Warrior special?

They need to make the second season finale be able to act as a series finale. After the fiasco regarding season one being cancelled and there being less episodes ordered I do not think there will be a season 3.

The time slot might be a problem at first sight, but considered that since May 2017 Nielsen also takes Hulu and YouTube into their ratings measure, this could be a good thing since C+3 (watch within 3 days after original airing, without skipping commercials) still is the go-to figure for advertisers. Means, Nielsen takes delayed viewing on a broader scale into account now, not just “normal” DVR.

I can’t wait for the 2nd season, I DVR everything, so time frame means nothing to me I catch up on all my shows when I can. If time frame on Sunday night is going to be a problem then NBC may need to re think this.

This timeslot was supposed to be SHADES OF BLUE!

Apparently they changed their minds?

10:00 PM is the dead zone. Regardless of how good the show is, this time zone spells cancellation.

Timeless fans are concerned that 10 o’clock is too late for children to watch, and that people have to work the next day. It would’ve been worse on Friday I think, because people don’t watch TV Fri. night. But I wish it would not be at 10. , NBC, consider saving this wonderful show for us this time, and put it at an earlier hour.

Best option is for people with children to buy a VCR.

Yes! Timeless is my favorite show on TV. Wish it could have an earlier, family friendly time slot, but so glad it will be on the air! This cast is superb, great writing. Love the romances, and the mystery behind it all.