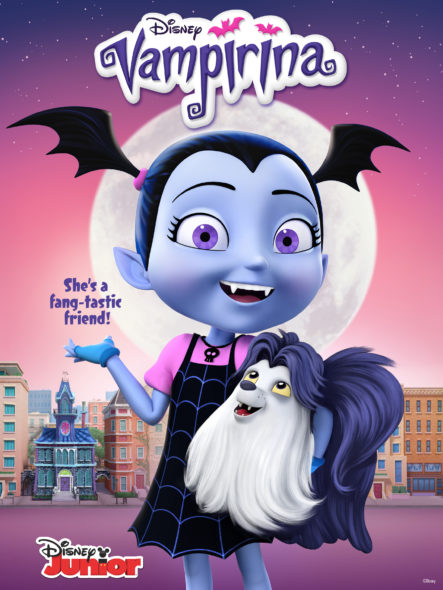 One animated TV series just got a little longer in the tooth. Disney Junior has renewed its Vampirina TV show for a second season. The children’s musical fantasy just premiered in in October of last year. Disney has not yet announced a season two premiere date.

Disney Junior Sinks Its Teeth Into a Second Season of ‘Vampirina’

DISNEY JUNIOR SINKS ITS TEETH INTO A SECOND SEASON OF ‘VAMPIRINA’

Disney Junior has ordered a second season of “Vampirina,” starring Lauren Graham, James Van Der Beek and Isabella Crovetti as the Hauntley family, friendly vampires who have recently relocated from Transylvania to Pennsylvania. The first vampire series for preschoolers, “Vampirina” blends spooky fun, heartfelt storytelling and Broadway-caliber music and follows Vampirina (aka “Vee”) as she faces the joys and trials of being the new kid in town, including making friends and attending a new school in the human world. The announcement was made today by Joe D’Ambrosia, senior vice president, Original Programming, Disney Junior.

D’Ambrosia said, “Vampirina’s relatable experience of a young girl trying to adapt and blend in with her new schoolmates, while also celebrating her own uniqueness, has resonated with our audience of young kids and families. We look forward to sharing more stories about the loveable young Vee, her new friends and her fantastical world of dancing gargoyles, playful ghosts and cuddly werewolves.”

An out-of-the-gate hit for kids and families, the Oct. 1, 2017 simulcast premiere of “Vampirina” on Disney Channel and Disney Junior ranked as the preschooler platform’s highest-rated new series premiere, in close to one year for Kids 2-5, Kids 2-8 and Adults 18-49, since the January 2017 premiere of “Mickey and the Roadster Racers.” To-date, the series has delivered over 90 million views across Disney apps, VOD, social media and YouTube platforms. Globally, the series has reached over 49 million total viewers and ranks #1 among key young kid demos in the U.K. and Italy. The series is available in 115 countries and 15 languages.

Extensions for the series include: multiple storybook and early reader book titles; comics and a magazine from Disney Publishing Worldwide; a DVD from Walt Disney Studios; as well as a Vampirina product line from Disney Consumer Products and Interactive Media, which includes the Scare B&B Playset, a popular item during the 2017 holiday season. New products will debut later this spring. “Vampirina” will also be featured in the upcoming “Disney Junior Dance Party On Tour” live concert experience launching March 14.

What do you think? Does your family watch the Vampirina TV series? Do you plan to tune in for the second season on Disney Junior?