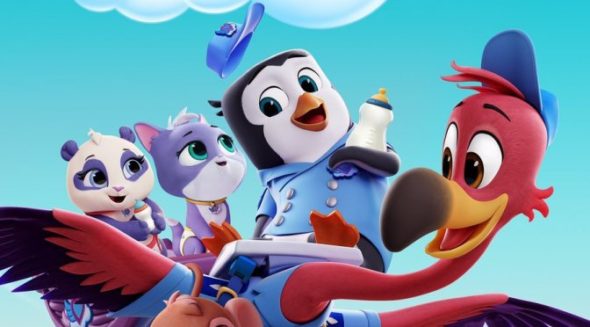 TOTS is growing up so fast. Disney Junior just announced they’ve renewed the TV show for a second season ahead of its debut.

The animated series “follows the adventures of best friends Pip and Freddy, a tenacious penguin and a kind-hearted flamingo, who are the only non-stork delivery birds in-training at Tiny Ones Transport Service (T.O.T.S.).”

Read more about the season two renewal below:

Disney Junior has ordered a second season of the animated series “T.O.T.S.” – ahead of the series debut, FRIDAY, JUNE 14 (9:00 A.M. EDT/PDT) – on Disney Channel and DisneyNOW. The comedy follows the adventures of best friends Pip and Freddy, a tenacious penguin and a kind-hearted flamingo, who are the only non-stork delivery birds in-training at Tiny Ones Transport Service (T.O.T.S.). Designed for kids age 2-7, “T.O.T.S.” stories suggest themes of positively interacting with and nurturing others while celebrating each other’s differences. Every episode has an original song and the recurring delivery anthem “Bringing This Baby Home.”

Each episode features two 11-minute stories that highlight the use of creative thinking, teamwork and problem solving to model for young viewers that there is more than one way to achieve a goal.

Extensions for the series include figures, playsets, plush and role-play items launching this summer. A soundtrack from Walt Disney Records, featuring 14 original songs, will debut on all streaming and digital platforms beginning Friday, June 14. The singles “Bringing This Baby Home” and “Time to Fly with T.O.T.S.” will be available May 12 and May 31, respectively.”

What do you think? Do your kids watch Disney Junior? Do you think they’ll watch TOTS?

I adore tots I know all the songs with my kids I even occasionally ask my kids if they have the koalakachoos when they sneeze just very disappointing there see no party decorations for this cartoon but PJ MASK IS EVERYWHERE AND I DO NOT LET NY KIDS WATCH NO OTHER CARTOONS BUT T.O.T.S. GECKO TAUGHT MY SON SPITTING WAS A DEFENSE MECHANISM. However the creator Travis braun is amazing to create such a good show about family teamwork and morals I LOVE IT!!!!

SHOOT I WISH THEY DID LIKE A THROW BACK THIRSDAY I HATE THE NEW SHOWS I LOVE THE LD ONES MY FAVE ONE IS SHERRIFF CALLIE!!

My son who is turning 1 next month absolutely loves T.O.T.S!! Its his favorite show! It makes him smile and laugh. This show is so good for children to watch. There are so many life lessons and it teaches them to be good people. Even the older kids and my husband I love it!

My grandson is 11 months we started tots day one it came out, he loves this show, I have to admit my daughter and I do as well. Keep them coming, we have all shows saved on DVD for when he really needs some down time, the music immediately sets him in a good mood.

Just wanted to tell you how wonderful t.o.t.s is. My 5 month old grandson Thomas loves this show. He smiles as soon as the music starts. Please keep them coming. It’s a wonderful show.