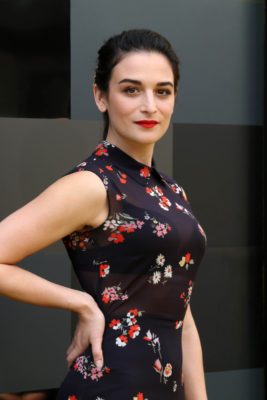 Based on the original animated series from Jim Henson, the reboot will follow “the hilarious playroom antics of the young Kermit the Frog, Piggy, Fozzie Bear, Gonzo, Animal and brand-new Muppet Baby, Summer Penguin.”

On Muppet Babies, Slate will voice Miss Nanny, the Muppet’s caregiver. The series reboot premieres this March on Disney Junior.

Jenny Slate (Disney’s Academy Award(R)-winning “Zootopia”) will voice the iconic role of Miss Nanny in Disney Junior’s reimagined “Muppet Babies,” premiering this March on Disney Channel. Slate will bring to life the voice of the Muppet Babies’ loving and playful caregiver, a character originally voiced by legendary actress, the late Barbara Billingsley (“Leave it to Beaver”). Almost 30 years after the Muppet Babies first stole the hearts of kids and families around the world, the series chronicles the hilarious playroom antics of the young Kermit the Frog, Piggy, Fozzie Bear, Gonzo, Animal and brand-new Muppet Baby, Summer Penguin.

As in the original Emmy(R) Award-winning series, Miss Nanny will only be visible from the torso down. Adding a new touch to the reimagined series, the pattern of Miss Nanny’s tights will change in each episode to reveal the story’s theme. As always, Miss Nanny gently and cheerfully encourages the Muppet Babies to use their imaginations to explore the farthest corners of the universe and to utilize their creative thinking to solve most any problem.

Also joining the cast are: Melanie Harrison (“Fish Hooks”) as Piggy; Dee Bradley Baker (“Milo Murphy’s Law”) as Animal; Ben Diskin (“The Spectacular Spider-Man”) as Gonzo; Eric Bauza (“The Adventures of Puss in Boots”) as Fozzie Bear; Jessica DiCicco (“Puppy Dog Pals”) as Summer; and rounding out the cast as Kermit is Matt Danner (“Gravity Falls”), who also serves as supervising director on the series.

The series is a co-production between Disney Junior, Disney Consumer Products and Interactive Media’s (DCPI) Publishing and Digital Media group, and The Muppets Studio.”

What do you think? Did you watch the original Muppet Babies? Will you check out the reboot?