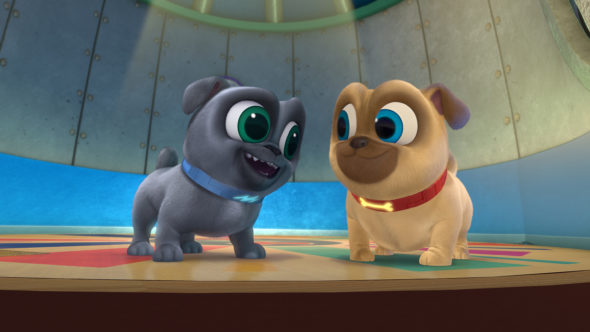 Get ready for even more puppy adventures. Disney Junior has renewed their animated series, Puppy Dog Pals, for a fourth season, per The Hollywood Reporter. This is in advance of the return of its new season. Season three will arrive on the network on November 8.

The animated series follows the adventures of two pug puppies named Bingo and Rolly. Each episode of Puppy Dog Pals contains two 11-minute long stories that show kids the importance of friendship and collaboration while the two pugs use their problem-solving skills.

The voice cast of the Disney Junior series includes Issac Ryan Brown as Bingo and Sam Lavagnino as Rolly. They are joined by Tom Kenny as A.R.F. and Jessica DiCicco as Hissy.

During season three of the series, viewers will hear a number of guest celebrity voices including Darius Rucker, Jennifer Nettles, Chi McBride, and Malcolm-Jamal Warner.

What do you think? Are you a fan of Puppy Dog Pals in your home? Will you watch the series when it returns next week for season three?

My 2 year old Daughter and I watch puppy dog Pals together and we both enjoy the show. We also like the 1/2 hr that we spend just her and I. We like the character Anna, she is a good addition to Bob and Bingo & Rollie. Keep the show going!

I love those dogs and their pals. I am a dog lover but I feel that Bob should show more affection with Hissy. Sometimes you see him like ignoring the poor cat and she searching for attention.

I think they should