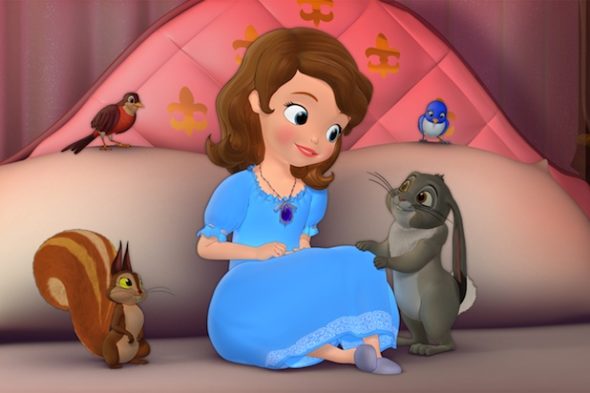 The animated children’s series “tells the story of an adventurous little girl who becomes a princess overnight after her mom marries the king.”

The finale of Sofia the First, titled “Sofia the First: Forever Royal,” debuts on Disney Junior on September 8th at 11 a.m. ET/PT.

Set in the storybook world of Enchancia, “Sofia the First” tells the story of an adventurous little girl who becomes a princess overnight after her mom marries the king. Throughout her journey, she discovers that looking like a princess isn’t all that difficult, but possessing the characteristics of a true princess – honesty, loyalty, compassion and grace – is what makes one truly royal. The series stars the voices of Ariel Winter as Sofia; Sara Ramirez as Queen Miranda; Wayne Brady as Clover; and Tim Gunn as Baileywick.

In the finale episode, as Sofia, and siblings Amber and James, prepare for their graduation from Royal Prep Academy, Sofia is called back to the Mystic Isles to face an evil witch named Vor, who is trying to take over the kingdom of Enchancia. Presented with her biggest challenge yet, Sofia must figure out a way to defeat Vor and save her family and the people of Enchancia. “Sofia the First: Forever Royal” features recurring guest stars Eric Stonestreet as Minimus, Bonnie Hunt as Aunt Tilly, Andrew Rannells as Skye, Megan Hilty as Prisma, Ellie Kemper as Crackle, Ming-Na Wen as Vega, Colin Salmon as Orion, Jurnee Smollett-Bell as Chrysta, Paty Lombard as Vor and Hugh Bonneville as the Voice of the Secret Library.

Featuring over 100 episodes and two record-breaking primetime specials, “Sofia the First” will continue to air on Disney Junior and Disney Channel platforms around the world.

“Sofia the First” is executive produced by Jamie Mitchell and Craig Gerber. Mitchell also serves as director and Gerber developed the series and wrote the finale episode along with Michael G. Stern. Emmy Award-winners John Kavanaugh (“Elena of Avalor”) and Kevin Kliesch (“Tangled: The Series”) serve as songwriter/music director and composer, respectively. The series is a production of Disney Television Animation.”

What do you think? Do your kids watch Sofia the First? Are you sad it’s ending?

I was very happy because it ended,

Yes I have been waiting for it to end! Now it has ended.