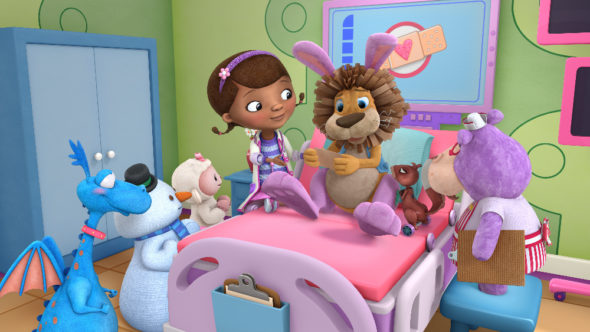 The animated children’s series “tells the story of a young girl who aspires to be a doctor like her mom and communicates with and heals toys, has been lauded by parents, educators and health-care professionals around the world for having a lasting impact on how children see themselves and their future.”

The fifth and final season of Doc McStuffins premieres on Disney Junior on October 26th at 11 a.m. ET/PT.

Season five of Disney Junior’s Peabody Award-winning “Doc McStuffins” will premiere FRIDAY, OCT. 26 (11:00-11:30 a.m. EDT/PDT), on Disney Channel and the DisneyNOW app. The series, which tells the story of a young girl who aspires to be a doctor like her mom and communicates with and heals toys, has been lauded by parents, educators and health-care professionals around the world for having a lasting impact on how children see themselves and their future.

The new season will bring the series to a total of more than 150 episodes, shorts and specials. Included in season five will be “The Doc McStuffins Christmas Special,” premiering this Decemberon Disney Junior. The special, which is part of Disney|ABC Television’s annual “25 Days of Christmas” programming event, will also air on Disney Channel, ABC and Freeform throughout the holiday season.

“Doc McStuffins” premiered in March 2012 and since then has become one of the most beloved preschool television properties of all time. Described by Emmy® Award-winning producer, socio-political comedian and dad to three girls, W. Kamau Bell, as “one of the most important shows in the history of television,” the series has been credited by many health-care professionals for helping to allay children’s fears of going to the doctor. “Doc McStuffins” has also been cited in recent reports, including a study done by The Geena Davis Institute on Gender in Media in partnership with IF/THEN, an initiative of the Lyda Hill Foundation, for having a positive impact on young kids’ aspirations, particularly girls, to pursue STEM careers.

Shortly after the series launched, a group of female African-American physicians began a “movement” they coined “We Are Doc McStuffins.” Seeing a reflection of themselves in the Doc character and the opportunity to inspire young girls, the group grew to form the Artemis Medical Society, an organization which now boasts a membership of over 4700 women physicians of color from around the world, and has a mission of providing the foundation necessary to create a diverse physician workforce.

In addition to critical acclaim, “Doc McStuffins” has inspired an immersive traveling museum exhibit designed for kids age 2-7, spreading the show’s messages of care and compassion directly into local communities. The series is currently featured in the “Disney Junior Dance Party On Tour” live concert experience, which began its second leg of the U.S. tour last month, and the popular “Disney Junior Dance Party!” attraction at Disney California Adventure park, which will also be opening at Disney’s Hollywood Studios at Walt Disney World Resort later this year. Additional brand extensions for the series include books, comics, activity books and a magazine from Disney Publishing Worldwide; multiple DVD releases from Walt Disney Studios and various soundtracks from Walt Disney Records. The multiple award-winning toy line is available at retailers nationwide, with new products debuting this fall.

The series was created and is executive produced by Humanitas Prize and Emmy Award-winner Chris Nee. Emmy-winning Norton Virgien serves as supervising director and co-executive producer. The Hollywood Health & Society division of the USC Annenberg Norman Lear Center serves as the series’ health and medical consultants, advising on basic health issues that are relevant to young kids and families. “Doc McStuffins” is a production of Academy Award®-nominated Brown Bag Films in association with Disney Channel.”

What do you think? Do your kids watch Doc McStuffins? Are you sad to see the series end?

I watch cartoons with my grandson. Many cartoons are pretty boring for adults. However, Doc McStuffins was truly wonderful! I want my grandson to grow up understanding girls can do anything boys can do! This was one of those shows that didn’t lecture but taught kids invisibly. Shame on Disney!! Just because there are enough episodes for reruns. One thing Disney shouldn’t be doing is to be cheap!

This show is why my daughter feels comfortable with my many doctors, nurses and phlebotomists touching me. She has become interested in what is going on and normalized what they are doing. My daughter absolutely LOVES giving checkups to our pets, her toys, stuffed animals, her friends, my husband and I and my doctors even let her give them a “checkup.” It’s the sweetest thing and the greatest blessing because it’s halted meltdowns in doctors offices and brought in compassion, empathy, love, care and overall good bedside manner. I have enjoyed watching my daughter evolve simply by watching what she… Read more »

DOC Mcstuffins is one of the greatest cartoons available for children ever. IF you can keep mickey on then you can keep Doc Mcstuffins on. It’s a cartoon that can last through many generations. There was no need to cancel it. Children need Doc Mcstuffins it helped them to understand health and wellness on a different level.

Doc McStuffins is my favorite Disney show. Please bring it back!

I have 2 great nieces that have cerebral palsy, in wheelchairs, legally blind, are teenagers in years, but need younger shows. This was an absolute great show. Not too babyish, nor too greenish. They have all the toys and DVDs. I’ve had to custom order t shirts. They dress up like Doc for Halloween. Such awonderful show for kids. Please keep Doc Mcstuffins on.

Oh my goodness, I’m late on seeing this. My grandbabe loves this show, she even have her shirts out fit and anything that have her face on it when we go to toys stores. On Saturday when out of school that whats the station is turn to, I hate that it want have another series