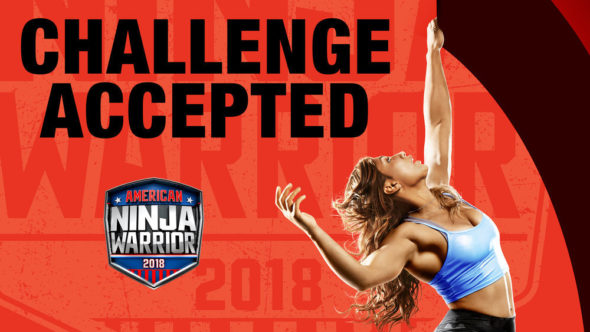 Is victory at hand? Has the American Ninja Warrior TV show been cancelled or renewed for an 11th season on NBC? The television vulture is watching all the latest cancellation and renewal news, so this page is the place to track the status of American Ninja Warrior, season 11. Bookmark it, or subscribe for the latest updates. Remember, the television vulture is watching your shows. Are you?

An NBC reality TV series competition hosted by Matt Iseman, Akbar Gbaja-Biamila, and Kristine Leahy, American Ninja Warrior is based on the Japanese series, Sasuke. The show features competitors taking on series of obstacle courses in both city qualifying and city finals rounds. Contestants who complete the finals course in their area move on to the national finals round. In season 10, the show will visit Dallas, Miami, Indianapolis, Philadelphia, Los Angeles and Minneapolis before heading to Las Vegas to take on the four-stage course that’s been modeled after the famed Mt. Midoriyama course in Japan. At stake is a grand prize of $1,000,000.

2/14/19 update: NBC has renewed American Ninja Warrior for an 11th season (the eighth on the network).

What do you think? Are you glad that the American Ninja Warrior TV show has been renewed for season 11 and season 12? How would you feel if NBC had cancelled this TV show, instead?

Multiple generations of my family watch the show .we all look forward to see.

I am thrilled America Ninja was renewed! It’s my favorite show! Love, Love, love it and all the competitors!

Please dont ever cancell this show! I love it!!

Absolutley Renew ANW S11..
I’ll be Very Upset if it is cancelled..

What will I do with no American Ninja Warriors to watch? How can you leave Joe the Weatherman out to dry? Please renew.

Please don’t cancel! My friends and I look forward to the show every week and it really serves as positive inspiration for the youth.

Terrific show!! I don’t think I would have TV if I couldn’t watch ANW!! Don’t cancel it or you will have an unhappy camper.

I really hope it be back back on tv this year. 8 will be disappointed if it not back on

We love this show. will be very disappointed if it is cancelled.

NBC – PLEASE DO NOT CANCEL THIS SHOW ! There are few shows left on television that are as inspirational as this show. The athletes that compete are real people, many with back stories that provide hope to men,women and children of all ages. The show has motivated me to become, and maintain a more healthy life style, at nearly 60 years of age.

It would be a shame to cancel this show my family and I love it.

It would be a complete shame to cancel this show my family loves it.

I have watched A.N.W. since it began 10 years ago. I absolutely love this show, it is pure talent and has some of the greatest athletes in the world perform. If It does not return I will absolutely lose faith in NBC !!! Television has literally gone down the crapper with the releases of new shows for several years now. What are the decision makers in Hollywood thinking anymore??? A.N.W. is as good or better than the Summer Olympics. Hollywood needs a new set of decision makers in my opinion!! Regardless if NBC does decide to continue on with A.N.W.… Read more »

I think it would suck if they canceled ANW. I’ve watched for the last 4 years and have really felt like I’ve connected with some of the athletes.

My 80 yr. old Mother is a such an ANW addict she had me make our dog a ANW T-Shirt so he could wear it while watching the show with her!. She would be absolutely disappointed if there were no Session 11 to watch on TV.