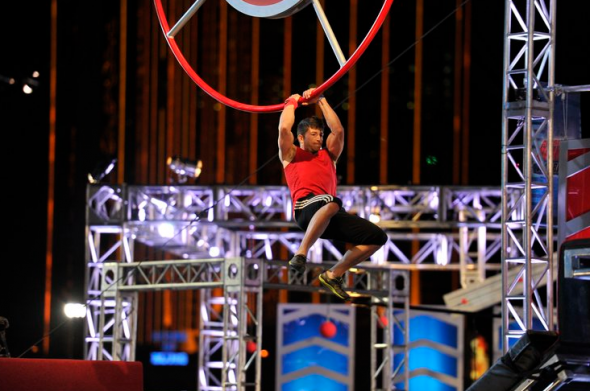 American Ninja Warrior is back in action! NBC just announced they’ve renewed the TV show for its 11th season.

The competition series, which began on G4 in 2009,  follows contestants as they try to complete series of obstacle courses in both city qualifying and city finals rounds for a prize of $1,000,000.

It’s no surprise that NBC has renewed American Ninja Warrior. The series has been a ratings hit in 2012. The show’s 10th season, which wrapped in September 2018, averaged a 1.07 rating in the 18-49 demo and 5.082 million viewers. And while that’s a near 25% drop in the ratings, the show still remains one of the network’s top-rated unscripted series.

You can read more info below. (Note: NBC refers to the upcoming season as American Ninja Warrior’s eight season, but it is the show’s 11th season overall, including the seasons on G4)

UNIVERSAL CITY, Calif. – Feb. 14, 2019 – NBC’s three-time Emmy Award-nominated series “American Ninja Warrior” will be returning this summer to NBC for its eighth season. Production will begin in the spring and a premiere date will be announced shortly.

The show’s national finals will once again take place in Las Vegas.

The action-packed series follows competitors as they tackle challenging obstacle courses in city qualifying and finals rounds throughout the country. Top competitors in each of the city finals rounds move onto the national finals, where they compete on a four-stage course that includes multiple obstacles on each stage. The winner, who must complete all four stages, including the final 75-foot rope climb, will take home a grand prize of $1 million.

In addition, the ninja to go the farthest on the national finals course wins $100,000. Last season’s inaugural “last ninja standing” was “American Ninja Warrior” veteran Drew Drechsel. Drechsel has competed on eight seasons of the show to date and recently served as the captain for Team USA on the show’s annual “USA Vs. the World” telecast.

Last season, “American Ninja Warrior” introduced several new twists, including lowering the competitors’ age limit to 19, which ushered in a new generation of strong, swift ninjas, and the fan-favorite 18-foot mega-warped wall, which offered competitors a chance to instantly win $10,000.

This season will bring some new, significant changes to the course and the game play, including new rules for the mega-warped wall and never-before-seen obstacles.

NBC’s summertime staple is always a strong ratings performer. Last year “American Ninja Warrior” delivered a 1.3 rating in adults 18-49 and 5.9 million viewers overall in “live plus seven day” Nielsens, scoring as the most-watched broadcast of the night with each of its final five telecasts of the summer. The show consistently generated top-10 rankings among primetime shows on the Big 4 networks in numerous key demographics, including a #3 ranking among kids 2-11 behind only the two editions of “America’s Got Talent.”

Based on the global hit “Sasuke,” from Tokyo Broadcasting System Television, the original series is now in its 36th season in Japan.

For artwork and a complete press kit from the show, please visit the NBC Universal Media Village website at http://www.nbcumv.com/mediavillage/networks.

What do you think? Do you watch American Ninja Warrior? Are you glad it’s coming back?