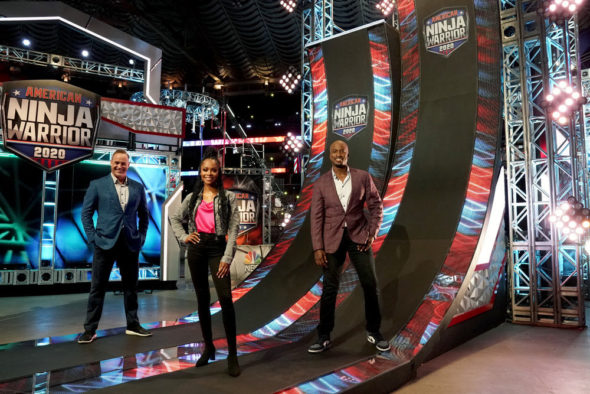 How will this summer show perform in a fall timeslot?  Has the American Ninja Warrior TV show been cancelled or renewed for a 13th season on NBC? The television vulture is watching all the latest cancellation and renewal news, so this page is the place to track the status of American Ninja Warrior, season 13. Bookmark it, or subscribe for the latest updates. Remember, the television vulture is watching your shows. Are you?

Airing on the NBC television network, American Ninja Warrior is hosted by Matt Iseman, Akbar Gbaja-Biamila, and sideline reporter Zuri Hall. The TV show is a high-octane obstacle course competition. Season 12 is filmed inside the Dome at America’s Center in St. Louis and features some of the nation’s top athletes competing in Qualifying, Semi-Final, and Finals rounds of competition. To determine the winner during the Finals, the top eight ninjas compete in a playoff bracket where they race head-to-head on the Power Tower. The winner earns $100,000 as a prize.

Will NBC cancel or renew American Ninja Warrior for season 13? This year, due to COVID-19 production delays and challenges, the season has just eight episodes and the NBC series has been moved to the fall schedule. Despite the modifications and weaker ratings, I’m confident that there will be a 13th season renewal. I’ll update this page with breaking developments. Subscribe for free alerts on American Ninja Warrior cancellation or renewal news.

3/10/21 update: American Ninja Warrior has been renewed for a 13th season.

What do you think? Are you glad that the American Ninja Warrior TV show has been renewed for a 13th season? How would you feel if NBC cancelled this TV series, instead?

I hope it gets renewed. There are such inspirational stories of regular people fighting normal adversities, it brings it all closer to home and real. Unlike a lot of today’s reality tv. I love the show! It is inspiring, competitive and exciting, and a family show all in one! When I first started watching American Ninja Warriors, I thought to myself, “I can do that, I will start training and try out.” But of course life got in the way. Now I feel I am a bit too old to start, though you never know. I still love watching and… Read more »

I hope it gets renewed, have been watching from the first season, it is fun to root for everyone and love the drama free vibe of this show.