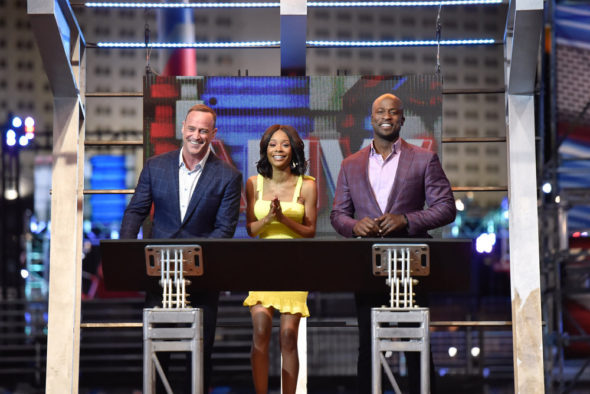 The games are on! NBC has renewed the venerable American Ninja Warrior TV series for a 13th season which will debut on Monday, May 31st. This will be the first time that two cycles have aired during the same broadcast season.

An athletic competition series, American Ninja Warrior is hosted by Matt Iseman, Akbar Gbaja-Biamila, and sideline reporter Zuri Hall. The TV show is a high-octane obstacle course competition. Season 12 was filmed inside the Dome at America’s Center in St. Louis and features some of the nation’s top athletes competing in Qualifying, Semi-Final, and Finals rounds of competition. To determine the winner during the Finals, the top eight ninjas compete in a playoff bracket where they race head-to-head on the Power Tower. The winner earns $100,000 as a prize.

The series typically airs during the summer months but the 12th season was delayed until Fall 2020 and aired for just eight episodes. The 12th season of American Ninja Warrior averaged a 0.51 rating in the 18-49 demographic and 3.02 million viewers. Compared to season 11, that’s down by 41% in the demo and down by 35% in viewership.

Season 13 of “American Ninja Warrior,” where some of the most elite athletes in the country compete on the world’s most difficult obstacle courses, will return on Monday, May 31 (8-10 p.m. ET/PT).

Hosts Matt Iseman, Akbar Gbajabiamila and Zuri Hall are all back to call the action, which is set to take place in Seattle, Los Angeles and Las Vegas for the finals.

The new season will feature more than 400 competitors and, for the first time in “ANW” history, the age limit to compete is being lowered to 15 years old. Ninja Warrior is a sport that has been rapidly growing across the country and kids of all ages are embracing it in record numbers. Some of today’s most promising talent are younger competitors and now teenagers will have the chance to compete alongside adult athletes.

A top prize of $1 million will go to the winner if they can conquer all four stages at the National Finals in Las Vegas. To get there, competitors will need to make it through the qualifying rounds and semifinals.

The series is executive produced by A. Smith & Co. Productions’ founders Arthur Smith and Kent Weed along with Brian Richardson, Anthony Storm and Kristen Stabile.

The network has also announced return dates for America’s Got Talent (season 16) and Making It (season three).

What do you think? Do you enjoy the American Ninja Warrior TV show? Do you plan to watch season 13 on NBC this summer?

These new competitions are going to be quick. Maybe faster than the older ninjas.

No one in his right mind would miss season 13. I have been watching Ninja since it was just the Japanese series. The American Ninja came out. Love to watch see everyone there.

I am so looking forward to American ninja warriors

I am so happy to hear that the show will be starting again in May. I really enjoy watching it.

So happy it is coming back. I found it by accident about six years ago and have been hooked ever since.