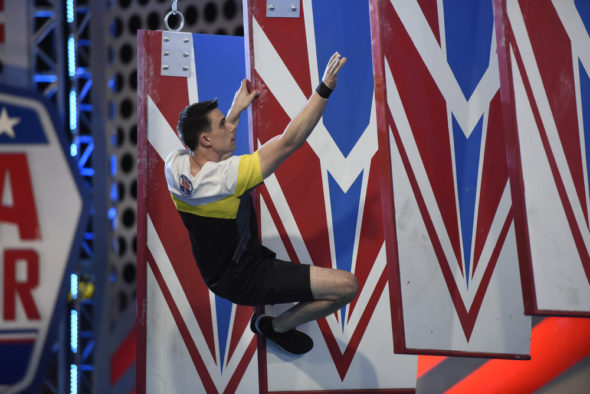 Make way for the new warriors. NBC has confirmed it has renewed the American Ninja Warrior TV show for a 10th season. Season 10 premieres on Wednesday, May 30, 2018 at 8:00pm ET/PT. Production on the new cycle began, today.

An NBC competitive reality TV series, American Ninja Warrior is a sports competition based on the Japanese series, Sasuke. Matt Iseman, Akbar Gbaja-Biamila, and Kristine Leahy are all returning to the show, which follows competitors in series of obstacle courses in both city qualifying and city finals rounds. Contestants who complete the finals course in their area move on to the national finals round. The course is modeled after the famed Mt. Midoriyama course in Japan. At stake is a grand prize of $1,000,000.

Learn more about from this NBC press release excerpt.

The two-time Emmy Award-nominated “American Ninja Warrior” returns for its seventh full season on NBC. Hosts Matt Iseman and Akbar Gbajabiamila are back, along with co-host Kristine Leahy.

The action-packed series follows competitors as they tackle a series of challenging obstacle courses in both city qualifying and city finals rounds across the country. Those that successfully complete the finals course in their designated region move on to the national finals round in Las Vegas where they face a stunning four-stage course modeled after the famed Mt. Midoriyama in Japan. The winner will take home a grand prize of $1 million.

This season the show will make stops in Dallas, Miami, Indianapolis, Philadelphia, Los Angeles and Minneapolis before heading to Las Vegas.

What do you think? Do you plan to check out the 10th season of the American Ninja Warrior TV series? Let us know, below.