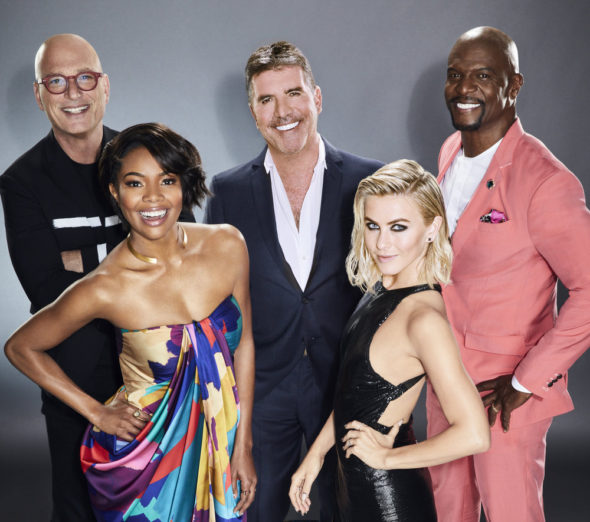 TV show description:
American Idol’s Simon Cowell created the America’s Got Talent TV show and based on his global format, but did not judge the US edition until season 11, due to contractual obligations.

As of 2019, actor/comic Howie Mandell — who replaced David Hasselhoff in the fifth season — is the longest serving member of the judging panel, He’s followed by Cowell, who took over for Howard Stern (the replacement for Piers Morgan).

Actor Gabrielle Union and dancer/entertainer Julianne Hough joined in the 14th season, replacing Heidi Klum and Mel B. In the show’s early years, there was only one female judge on the panel. Initially, it was Brandy Norwood, who departed after the first season and was replaced by Sharon Osbourne through season seven. Actor Terry Crews also joined the series in season 14 as host — a position previously held by Tyra Banks, Nick Cannon, and Jerry Springer, all of whom followed original host Regis Philbin.

Acts for this program include singers, dancers, comedians, magicians, and more. After a pre-audition process (unseen by the television audience), performers audition in front of an audience and the judges. Each judge has a buzzer they can hit to stop the act if they don’t enjoy it, often with the audience egging them on. If all of the judges hit their buzzers, the act has to stop.

Whether contestants are stopped or are allowed to continue to the end, they are judged by the panel, who determines whether they’ll be allowed to continue with the show. Throughout the show’s years on the air, the format has changed in several ways. In the ninth season a “golden buzzer” was added, which allows the judges to save an act or advance it to the live shows. As of season 11, the host can also use it.

Performers who make it to the live rounds are divided into groups, to compete against one another in hopes of securing a spot in the finals. The number of acts has varied from season to season, and these rounds have been broadcast from different cities, including Las Vegas and Los Angeles. Some seasons have employed a wildcard, in order for judges (and the voting audience) to give eliminated talent yet another shot at winning.

During the course of the live rounds, contestants continue to be eliminated. The ultimate winner of the show goes on to receive a $1 million cash prize and headlines a show, which usually takes place in Vegas.


What do you think? Are you a fan of the America’s Got Talent TV series? Should this NBC TV show be cancelled or renewed for another season?

THE BEST SHOW EVER!!

WHAT’S NOT TO ❤ ❤ ❤ !!! So, So, So ENTERTAINING and can take you through a journey of so many different EMOTIONS !!! Sometimes, you can’t even believe what you are seeing or hearing ? LOVE IT, LOVE IT, LOVE IT !!!

AGT is must-see TV in my house. Have been watching it from the beginning. Even watched it when I lived overseas from 2006-2018. I only wish that US television had more of the international Got Talent shows, especially Britain’s Got Talent.