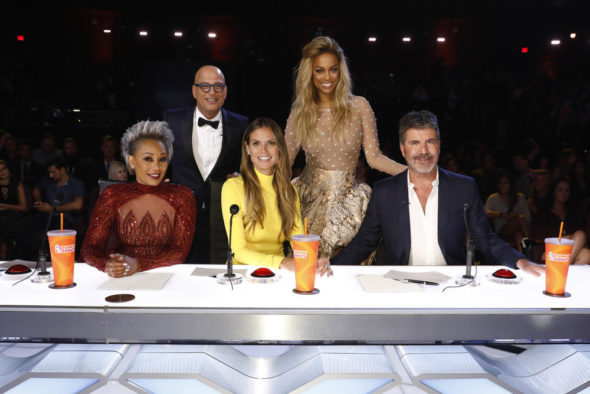 Although they haven’t yet released a formal announcement, NBC has renewed its America’s Got Talent TV show for a 13th season. Reportedly, host Tyra Banks and all four of the season 12 judges will return for the new installment. The season 13 premiere date is still TBD, with open auditions in Phoenix, AZ on February 24th, while online auditions are open until March 9, 2018 (details below).

America’s Got Talent: A Look at the Ratings

The 12th season of America’s Got Talent averaged a 2.63 rating in the 18-49 demographic and 12.90 million viewers, on Tuesdays. Compared to Tuesdays in season 11, that’s up by 6% and up by 10%, respectively. The Wednesday editions averaged a 2.22 in the demo with 12.01 million viewers, up by 3% in the demo and up by 10% in viewership. With increases like that, the renewal was a no-brainer. Find out how America’s Got Talent stacks up against other NBC TV shows.

NBC has renewed its summer staple for a 13th season, a spokesperson confirmed this afternoon. Simon Cowell, Howie Mandel, Heidi Klum and Mel B are all returning as judges while Tyra Banks is also due back as the show’s host.

A premiere date will be announced shortly. The Peacock also offered the following ratings highlights:

· Last summer, “America’s Got Talent” averaged a 3.5 rating in adults 18-49 and 16 million viewers overall in “live plus seven day” averages for original Tuesday telecasts, according to Nielsen Media Research. That made it the most-watched season in its 12-year history. “AGT” was easily the #1 summer show in both measures and provided a strong lead-in to the #2 show of the summer, NBC’s “World of Dance.”

· Season 12 winner was 12-year-old singing ventriloquist Darci Lynne Farmer from Oklahoma City. Farmer received the most votes ever for a finale show and dazzled audiences with her performances featuring puppets Oscar and Petunia.

· Season 11 winner Grace VanderWaal continues to excel. The 14-year-old singer-songwriter announced today she will be joining Imagine Dragons as special guest on their U.S. tour. Since winning “AGT,” she released her debut album “Just the Beginning” and launched her first-ever sold-out headline tour.

· Auditions for season 13 of “AGT” are still underway, with open calls being held in Phoenix, Ariz., on Saturday, Feb. 24. In addition, online auditions are open through March 9. Interested acts can submit a video at www.AGTAuditions.com.

Deadline has also reported on the America’s Got Talent Season 14 renewal.

What do you think? Are you a fan of the America’s Got Talent TV series? Do you think you’ll check out season 13 on NBC?

this has got to be the best show on television, well worth watching there are some amazing people with loads of talent bravo AGT