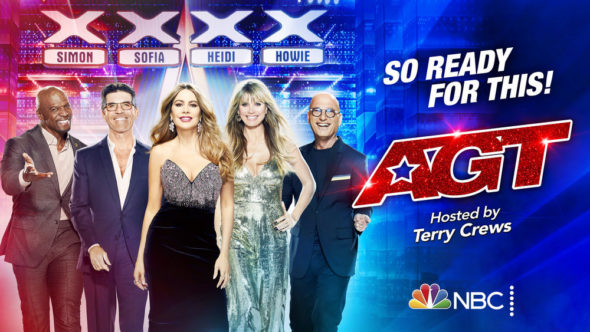 A staple of NBC’s summer schedule, America’s Got Talent has typically been the network’s best-performing program in the ratings. Unfortunately, this year has been anything but typical, and season 15’s regular production schedule had to be suspended in March. How will producers adjust to having to make episodes remotely? Could America’s Got Talent be cancelled or is it essentially guaranteed to be renewed for season 16? Stay tuned. *Status update below.

An NBC competition TV series, America’s Got Talent features both individuals and groups competing with various performance acts. The winning act receives a cash prize and the chance to headline in the America’s Got Talent Live show in Las Vegas. In season 15, Terry Crews returns as host. Season 14 judges Howie Mandel, Simon Cowell, and Heidi Klum are back at the judge’s table and are joined by actress Sofía Vergara.

What do you think? Do you like the America’s Got Talent TV series on NBC? Should it be cancelled or renewed for a 16th season?

Damn! The ratings this season are complete ****! What happened?

It could have been good this year if not for Covid-19,but since Covid hit and there is no audience and only 3 judges it is not fun to watch. Season 14 was not very good and the Champion seasons are no good, there are too many american acts in the Champion shows and you have just watched these same people a season or two before.