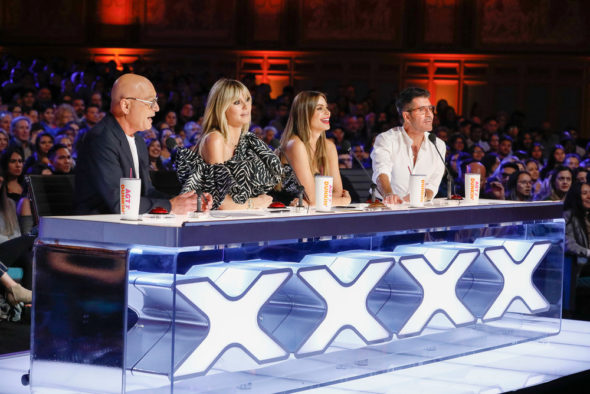 If you’ve got a talent and want a chance at stardom, you’ll be happy to know that NBC has renewed the venerable America’s Got Talent TV series for a 16th season. It’s expected to air during the summer of 2021. Though the peacock network hasn’t released a press release about the renewal, NBC has virtual auditions lined up for the end of this week.

America’s Got Talent features both individuals and groups competing with various performance acts. The winning act receives a cash prize and the chance to headline in the America’s Got Talent Live show in Las Vegas. In season 15, Terry Crews returned as host. Season 14 judges Howie Mandel, Simon Cowell, and Heidi Klum returned at the judge’s table, joined by a new judge, actress Sofía Vergara.

Here are details about the upcoming auditions for season 16:

In its landmark 16th season as NBC’s most watched show of the summer, America’s Got Talent (AGT) has announced its first-ever live virtual nationwide search for the next million-dollar superstar. Beginning November 14th, while America is safely social distancing, the country’s most talented variety acts are invited to sign-up for the chance to audition from the very comfort of their own homes.

Like AGT seasons past, hopefuls will have the opportunity to meet and perform for an America’s Got Talent producer, only this time via a live stream video link and, quite literally, from anywhere in America. In addition to showcasing their unique talent courtesy of custom-built Zoom technology, performers will have an intimate window to express why they are made for the world’s biggest stage.

With auditions being more convenient than ever, there is no time like the present for artists to take their shot on America’s Got Talent. If ease weren’t reason enough, virtual auditions will kick-off on Saturday, November 14th with an interactive guest appearance by AGT alumni magician, Shin Lim (Season 13 Winner) “signing in” to perform for and cheer on Season 16 entrants. While in the virtual audition waiting room, auditionees will also have the exclusive opportunity to ask Lim about his personal AGT journey, making for a once-in-a-lifetime audition experience.

Acts wishing to become part of the AGT community of prestigious performers should sign-up now or submit a previously recorded video online at www.AGTAuditions.com.

The full list of virtual audition dates are as follows:

For more information, please visit the FAQ page: https://www.americasgottalentauditions.com/faq/open-call/. Safety remains a primary concern for AGT so please be sure to follow all current local government regulations and restrictions, if any, relating to the Coronavirus disease, COVID-19, when preparing and submitting audition materials.

“America’s Got Talent” was created by Simon Cowell and is co-produced by Fremantle and Syco Entertainment. Simon Cowell, Sam Donnelly, Jason Raff, Trish Kinane and Richard Wallace are the executive producers.

The “Got Talent” format has had more than a billion global viewers since it began airing in 2006 in America and has aired in 194 territories worldwide. “Got Talent” holds the Guinness World Records title as the Most Successful Reality Television Format in history with more than 70 local versions produced across Europe, Asia Pacific, the Middle East, Africa, and the Americas.

What do you think? Do you like the America’s Got Talent TV show? Will you be watching season 16 on NBC during Summer 2021?

Big show so no surprise NBC renewed it! Used to always be number 1 for summer but took a huge nose dive this year. I’m sure pandemic with no live audience didn’t help. This is first year I saw it fall below 10 million.