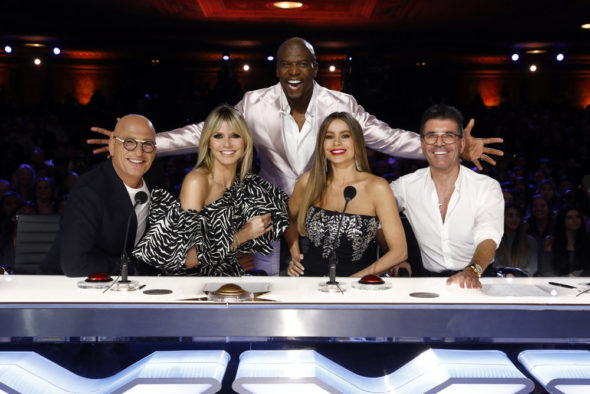 How will the pandemic affect this summer series? Has the America’s Got Talent TV show been cancelled or renewed for a 16th season on NBC? The television vulture is watching all the latest cancellation and renewal news, so this page is the place to track the status of America’s Got Talent, season 16. Bookmark it, or subscribe for the latest updates. Remember, the television vulture is watching your shows. Are you?

Airing on the NBC television network, America’s Got Talent features both individuals and groups competing with various performance acts. The winning act receives a cash prize and the chance to headline in the America’s Got Talent Live show in Las Vegas. In season 15, Terry Crews returns as host. Season 14 judges Howie Mandel, Simon Cowell, and Heidi Klum are back at the judge’s table and are joined by actress Sofía Vergara.

On Tuesday nights, the 15th season of America’s Got Talent averages a 1.04 rating in the 18-49 demographic and 7.37 million viewers. Compared to season 14’s Tuesday episodes, that’s down by 31% in the demo and down by 23% in viewership.

On Wednesday nights, the 15th season of America’s Got Talent averages a 0.63 rating in the 18-49 demographic and 5.46 million viewers. Compared to season 14’s Wednesday episodes, that’s down by 48% in the demo and down by 36% in viewership.

Will NBC cancel or renew America’s Got Talent for season 16? I have no doubt that the network will renew this series, regardless of what the ratings look like this season. I’ll update this page with breaking developments. Subscribe for free alerts on America’s Got Talent cancellation or renewal news.

What do you think? Do you hope the America’s Got Talent TV show will be renewed for a 16th season? How would you feel if NBC cancelled this TV series, instead?