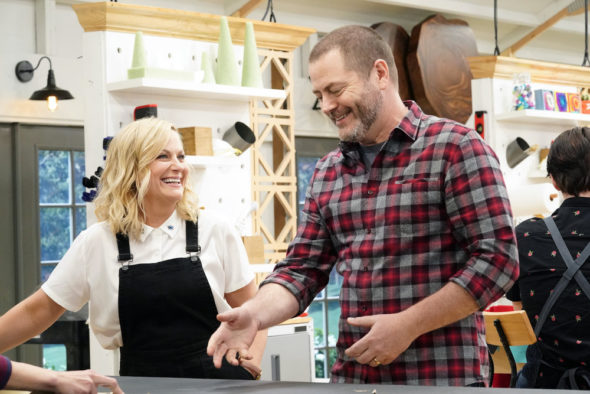 Can this series make it as a holiday tradition?  Has the Making It TV show been cancelled or renewed for a third season on NBC? The television vulture is watching all the latest cancellation and renewal news, so this page is the place to track the status of Making It, season three. Bookmark it, or subscribe for the latest updates. Remember, the television vulture is watching your shows. Are you?

Airing on the NBC television network, Making It comes from executive producers Amy Poehler and Nick Offerman, who also host the show. Each episode revolves around a central theme with the Maker contestants completing two crafts based on current trends in DIY and anchored in America’s love for all things handmade. The first challenge, a “faster-craft,” gives the Makers a limited time to execute their personal take on each theme. Next is the more in-depth “master craft” which challenges each Maker to display their respective expertise while combining originality, imagination, and quality finishing. The winners move on to the next round of the competition and, in the end, one contestant will be crowned “Master Maker”. Simon Doonan and Dayna Isom Johnson return as expert judges.

The second season of Making It averaged a 0.49 rating in the 18-49 demographic and 2.48 million viewers. Compared to season one, that’s down by 457% and 38%, respectively. Find out how Making It stacks up against other NBC TV shows.

Will NBC cancel or renew Making It for season three? The ratings were low in season one and were much lower in season two. My sense is that this show doesn’t cost much to produce and the peacock network wants to make it an annual holiday season tradition. It also doesn’t hurt that it’s hosted by two NBC sitcom veterans. So, based on the numbers, it could easily be cancelled but, I’m thinking that it will be renewed. I’ll update this page with breaking developments. Subscribe for free alerts on Making It cancellation or renewal news.

What do you think? Are you glad that the Making It TV show has been renewed for a third season? How would you feel if NBC had cancelled this TV series, instead?

Love the show.. I would like to see it expanded to show more hand crafts. To many people are not even aware of small crafts like tatting, hand sewing, quilting or fabric dyeing or painting. Making of beads or bead / jewelry making.

Bring back Season 3, I’ve been waiting for a while now. My husband has craft blood in him and he loves your show too.

I love this show. Think Season 2 ratings down because it just sort of popped up in the middle of the holiday season. Difficult for some folks to watch a show every night if they cant record it.

Please do more seasons of Making It! Love the show! It’s wholesome, funny and inspiring.

I love this show, but didn’t even know it was back on!

I love this program! Finally a reason to turn on ABC. The hosts and crafters are all enjoyable to watch. Hope they keep this one on & don’t cancel it.

I love it! Making it is very inspiring for whole family!!@ KEEP MAKING IT!!!