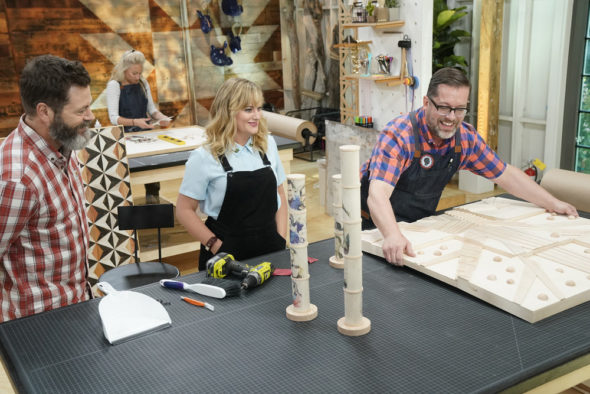 How creative and crafty is the first season of the Making It TV show on NBC? As we all know, the Nielsen ratings typically play a big role in determining whether a TV show like Making It is cancelled or renewed for season two. Unfortunately, most of us do not live in Nielsen households. Because many viewers feel frustration when their viewing habits and opinions aren’t considered, we’d like to offer you the chance to rate all of the season one episodes of Making It below.

An NBC competitive crafting reality TV series, Making It comes from executive producers Amy Poehler and Nick Offerman. The Parks and Rec vets also host the show, which features accomplished crafters taking on “Faster-Craft” and “Master Craft Collection” challenges, in hopes of securing the title of “Master Maker” and the grand prize of $100,000. Simon Doonan, the Creative Ambassador for Barneys New York, and Dayna Isom Johnson, an Etsy trend expert, judge the competition.

What do you think? Which season one episodes of the Making It TV series do you rate as wonderful, terrible, or somewhere between? Should NBC cancel or renew Making It for a second season? Don’t forget to vote, and share your thoughts, below.

8/21/18 update: NBC has renewed Making It for a second season. Details here.

This show has a lot of potential but needs some changes. The judges are comparing apples to oranges. They demand that the crafters actually damage their art by changing their styles. Everything doesn’t have to be done in primary colors! The woodworker is a perfect example. His work was beautiful without needing added colors. It might be better to have episodes devoted to one skill, such as woodwork, needlework, paper crafts. Let the viewers see more about HOW the crafters do their projects. Spend a little time showing viewers how to do some small project each episode – something they… Read more »

Boring! Hosts are terrible without a script.