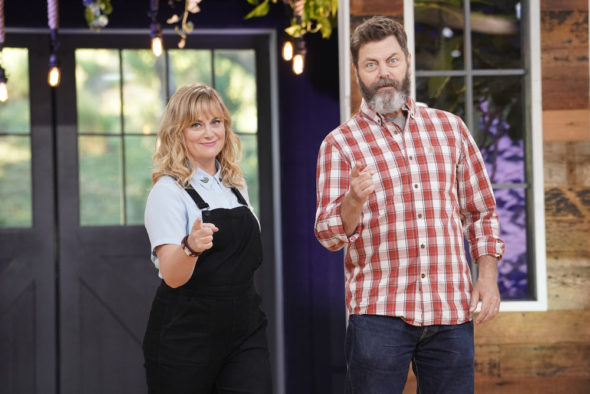 TV show description:
A crafting competition, the Making It TV show comes from executive producers Amy Poehler and Nick Offerman, who also host the reality TV series. It shines a spotlight on talented creators from across the US, who attempt to complete handmade projects in order to impress the hosts and judges Simon Doonan and Dayna Isom Johnson.

Although Poehler is a relative crafting novice, she is an enthusiast. She and Offerman share a love of the handmade. In addition to being a writer and actor, Offerman is a professional boat builder and accomplished woodworker. Joining the friends and Parks and Recreation vets are Doonan, the Creative Ambassador for Barneys New York and Johnson, an Etsy trend expert.

The friendly competition is set outside, and each episode features a central theme from a current trend in DIY and crafting. In every episode, the contestants will work on two projects meant to showcase their talents.

The “Faster-Craft” round is a time challenge, which draws on the competitors’ creativity as well as their ability to work quickly. In the “Master Craft Collection” round, the makers are assigned a unique, themed challenge, which will require all of their expertise and innovation, as they vie for the title of “Master Maker” and a grand prize of $100,000.

Series Finale:
Episode #22
Adam the industrial designer wins. He is crowned as Nick and Amy task everyone with a Making It staple – The Shed Hack, but this time, the Makers get to make a shed into their own personal “happy place.”
First aired: August 26, 2021.

What do you think? Do you like the Making It TV series? Should this NBC TV show have been cancelled or renewed for a fourth season?

I really do enjoy this show! Please keep it going!

I absolutely love this show. It’s one of my favorite reality shows ever!

Please keep it going. Love every aspect about it. Love the hosts and the creativity of the contestants.

LOVE this show! Keep it!!

I love this show. PLEASE keep it!

This show is awesome! Please keep this one on the air!!

Love it. Once a week would be great