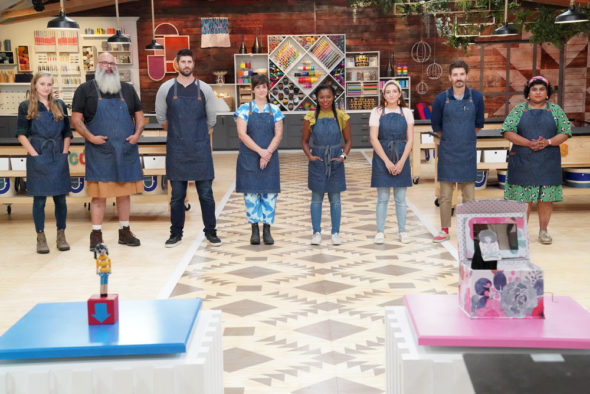 Who will be this year’s “Master Maker”? Has the Making It TV show been cancelled or renewed for a fourth season on NBC? The television vulture is watching all the latest cancellation and renewal news, so this page is the place to track the status of Making It, season four. Bookmark it, or subscribe for the latest updates. Remember, the television vulture is watching your shows. Are you?

Airing on the NBC television network, Making It is executive produced and hosted by Amy Poehler and Nick Offerman. Expert judges Dayna Isom Johnson and Simon Doonan return, along with woodshop master Jimmy DiResta. Season three celebrates how “making” brings together friends, neighbors, and families with a new group of the country’s most talented makers. From a retired professional baseball player to a taxidermist, these DIYers bring skill and heart as they create with mediums ranging from food to felt while sharing their unique stories and what drove them to pursue their passion for all things handmade. The winners move on to the next round of the competition and, in the end, one contestant will be crowned “Master Maker”.

The third season of Making It averaged a 0.30 rating in the 18-49 demographic and 1.79 million viewers in the live+same day ratings (includes all DVR playback through 3:00 AM). Compared to season two, that’s down by 40% in the demo and down by 28% in viewership. While these numbers don’t include further delayed or streaming viewing, they are a very good indicator of how a show is performing, especially when compared to others on the same channel. Other economic factors can be involved in a show’s fate, but the higher-rated series are usually renewed and the lower-rated ones are cancelled. Find out how Making It stacks up against other NBC TV shows.

Will NBC cancel or renew Making It for season four? This competition series comes from NBC vets Poehler and Offerman and doesn’t seem very expensive to produce. The traditional ratings aren’t great but I think this show will stick around for at least another year. I’ll update this page with breaking developments. Subscribe for free alerts on Making It cancellation or renewal news.

What do you think? Do you hope that the Making It TV show will be renewed for a fourth season? How would you feel if NBC cancelled this TV series, instead?

Please do not cancel this show!! It makes me so happy this is just a very happy show and is just unique and funny. My favorite show!!

I’ve only seen the show a couple of times but, I did find it educational and interesting. I do hope it will be back for several more years.

I adore this show, it makes me so happy. I feel bad because I’m part of the problem as to why the ratings are low… I stream each episode a day or two AFTER it originally aired! I think live ratings shouldn’t be considered as much as they are especially in this day in age since so many people enjoy the convenience of streaming. I hope there will be many more seasons!

Making It is one of my favorite shows. To me, it’s like an American version of the Great British Baking Show. Just, nice. I feel more nice shows are needed on TV. Amy and Nick are excellent hosts. The contestants actually help one another. I always feel better after each episode.

Pretty much all ratings are down A LOT compared to last year because we are not “stuck inside” I think it is more fair to compare the numbers to season 2.
I really do love this show and like was said, it *seems8 pretty “cheap” to make ( ok they are giving 100K away ) but comparted to other scripted or even other reality shows this has to be one of the cheaper ones to produce