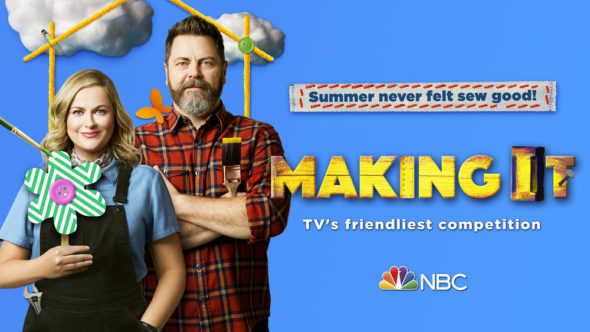 The ratings for this creative competition series have never been very high but then, the NBC show doesn’t seem like it’s very expensive to produce either. How long will it survive? Will Making It be cancelled or renewed for season four? Stay tuned. *Status update below.

Making It is executive produced and hosted by Amy Poehler and Nick Offerman. Expert judges Dayna Isom Johnson and Simon Doonan return, along with woodshop master Jimmy DiResta. Season three celebrates how “making” brings together friends, neighbors, and families with a new group of the country’s most talented makers. From a retired professional baseball player to a taxidermist, these DIYers bring skill and heart as they create with mediums ranging from food to felt while sharing their unique stories and what drove them to pursue their passion for all things handmade. The winners move on to the next round of the competition and, in the end, one contestant will be crowned “Master Maker”.

8/27 update: You can see the latest night’s ratings in context.

For comparisons: Season two of Making It on NBC averaged a 0.51 rating in the 18-49 demographic and 2.48 million viewers.

What do you think? Do you like the Making It TV series on NBC? Should it be cancelled or renewed for a fourth season?

*7/26/22 update: Making It has been cancelled by NBC so there won’t be a fourth season, at least for now.

Well of course it doesn’t get high ratings–I don’t recall a single ad for it! I LOVE THIS SHOW, it is absolutely my favorite show! But I found it by channel surfing and stumbling into it. How in the world can the show get higher ratings, which it SHOULD and WOULD get, IF the network doesn’t advertise its existence? So far everyone I’ve told about it had no idea it existed and after watching it, they told me they loved it too. The show is so upbeat–at a time when “stop bullying, be kind” is such an urgent message, this… Read more »

We love this show! Amy and Nick are so funny and they bring a lighthearted atmosphere. The makers are talented and kind. It’s such a welcome break from competition shows that attempt to manufacture drama.

First and last time to watch this program The hosts are way to over dramatic with the shouting of “Mega Craft” and there over flamboyant acting. I found them to be very annoying. Love the concept of Competing to build things though.

We watched Making It, but probably won’t watch again. It used to be really cute. But now, not so much. TMI from all the contestants…. One had to tell everyone she’s depressed, among others who talked too much. The Indian lady was way too chatty. That didn’t make it fun to watch their projects, it just made us want to speed thru! Stop all the chatter & get rid of those awful judges, too!