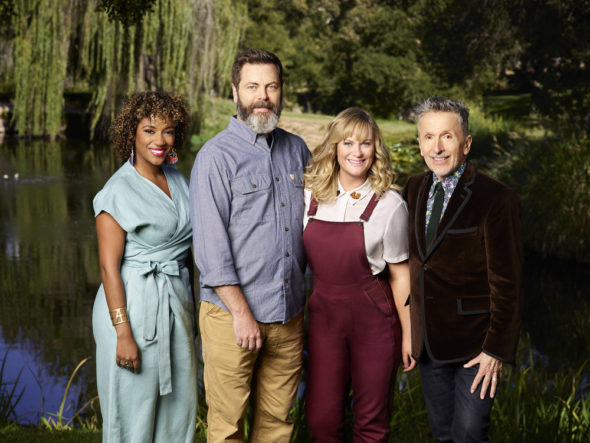 Have Amy Poehler and Nick Offer crafted a solid return to the Peacock Network. Has the Making It TV show been cancelled or renewed for a second season on NBC? The television vulture is watching all the latest cancellation and renewal news, so this page is the place to track the status of Making It season two. Bookmark it, or subscribe for the latest updates. Remember, the television vulture is watching your shows. Are you?

An NBC competitive crafting reality TV series, Making It comes from executive producers Amy Poehler and Nick Offerman. The Parks and Rec vets also host the show, which features accomplished crafters taking on “Faster-Craft” and “Master Craft Collection” challenges, in hopes of securing the title of “Master Maker” and the grand prize of $100,000. Simon Doonan, the Creative Ambassador for Barneys New York, and Dayna Isom Johnson, an Etsy trend expert, judge the competition.

The first season of Making It averaged a 0.88 rating in the 18-49 demographic and 4.01 million viewers. Find out how Making It stacks up against other NBC TV shows.

Will NBC cancel or renew Making It for season two? The ratings have not been good so, unless the network just really wants to stay in business with Poehler and Offerman, I can’t see this freshman series being renewed for a second season. For now, I’ll keep a hungry on the ratings and update this page with breaking developments. Subscribe for Making It cancellation or renewal alerts.

8/21/18 update: NBC has renewed Making It for a second season. Details here.

What do you think?Are you glad that Making It has been renewed for a second season? How would you feel if NBC had cancelled this TV show, instead?

The hosts are the only good thing about this show. Write another sitcom for them but to put us through this terrible show again? Means very few will be tuning in.
You should pick up the canceled show on SyFy called Faceoff. You could make it even more incredible with a bigger budget.

Yeah, season two of Making it is coming out. I think it’s out already. I can’t wait to watch the season finale though. Heartland Sheds company will have their maker inspired sheds on there. Should be cool…