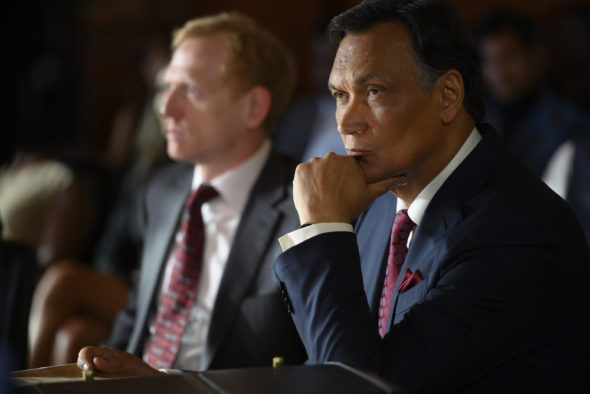 It looks like we may have the second cancellation of the 2019-20 television season — and the second for NBC. While the network hasn’t officially cancelled the Bluff City Law TV series, NBC has opted not to order any additional episodes. The first season is being capped at just 10 episodes.

Airing on Monday nights, the Bluff City Law TV series stars Jimmy Smits, Caitlin McGee, Scott Shepherd, Barry Sloane, Michael Luwoye, MaameYaa Boafo, Stony Blyden, and Jayne Atkinson. Coming from a famous Memphis family that’s known for taking on injustice, a brilliant lawyer named Sydney Strait (McGee) used to work at her father Elijah’s celebrated law firm until their tumultuous relationship got in the way. After barely speaking to Elijah (Smits) for years, Sydney is suddenly thrust back into the family fold when her philanthropist mother passes away unexpectedly. In the wake of the loss of his wife and in hopes of reconnecting with the daughter he loves, Elijah asks Sydney to rejoin his Civil Rights firm and take on a chemical company whose product may cause cancer. Despite her lingering resentment and distrust, she agrees because she knows that working alongside her father is her best hope at changing the world — as long as they can find a way to get along. No sooner has Sydney returned than she stumbles on a secret that Elijah has been keeping from her that may change everything.

After four episodes, the first season of Bluff City Law is averaging a 0.65 rating in the 18-49 demographic and 3.99 million viewers. The series, which follows The Voice (NBC’s highest-rated show) drew a 0.81 rating with 4.61 million viewers in its premiere. The most recent installment hit a 0.50 demo with just 3.39 million.

With numbers like these, it’s no surprise that NBC isn’t ordering any additional episodes and, unless the ratings start to miraculously climb, a second season renewal seems like a longshot, at best.

The network clearly had high hopes for Bluff City Law in that the programmers gave it a strong lead-in. Also, in August, NBC ordered six additional scripts, likely with the expectation of ordering additional first season episodes.

For now, it looks like the peacock network plans to air the remaining six episodes. Those plans could certainly change, especially if the ratings continue to fall. Last week, NBC cancelled the Sunnyside comedy series and plans to release the remaining episodes online.

What do you think? Do you like the Bluff City Law TV show? Do you think that it should be cancelled?

LOVED THIS SHOW!!!!!! PLEASE KEEP IT ON!!!!! I’m from Memphis, & I enjoyed looking at the spots around the city! Made me HOMESICK! I think it would be more authentic with them having a Memphian accent!

Loved this show! How refreshing to watch this family and friends circle navigate through challenges in a positive way! Loved the characters!

Now is not the time to cancel a legal drama show that models how ‘thinking’ people should handle issues that arise in a democratic society. Especially when the thinking people who need to be reached are people of color.

My Wife and I really enjoy this series, well done, too quick to pull trigger, it takes time to build a following, a quality show.