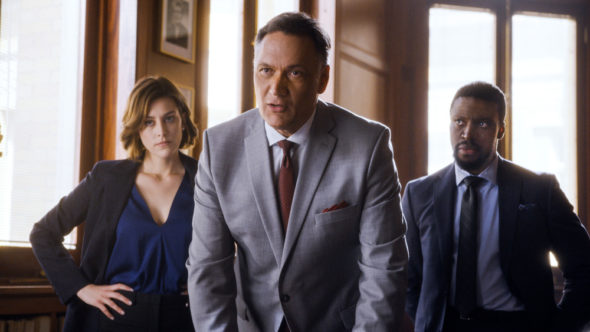 NBC is all in for their new legal drama. Deadline reports the network has ordered additional scripts for their upcoming TV show, Bluff City Law.

NBC has ordered six additional scripts of Bluff City Law. The new series is slated to debut this fall.

What do you think? Are you a fan of legal dramas?  Will you check out Bluff City Law?

Please renew Bluff City Law – I streamed the series while on self -isolation and was thrilled with every episode. Each one had my attention and I was sorry when I viewed the last one. The cast and their roles are a perfect fit. Again, please renew this series!

It is really very good series and should be extended with even more quality court events. True cases will be highly appreciable.

Bluff City Law was good T V for a change. Story, good acting, directing etc. I am to the point, my husband and I are binging on streaming because good shows with good actors get cancelled. It’s better to at least know how long a series is going to be around. I know after the first show if it’s good or not. If a network can watch and have eyes and ears they know if it’s good or not. If viewers are down advertise more. Try a new spot. The public is truly not stupid but you are losing us

Outstanding series. This program is the very first on broadcast television that I’ve actually enjoyed in many years.
The stories are relevant, well written, interesting and well played. A decent program the whole family can enjoy, which in today’s moral standard seems to make it unique.
Cancelling this fine program will absolutely cause me to give up on broadcast television to pick and choose my programs with the many different viewing options we have available.

I will absolutely be checking this out .. character driven drama is missing from our screens and this focus I hope will set the show apart from legal procedural..too much of that!

I will be watching Bluff City Law! Jimmy Smits is amazing.