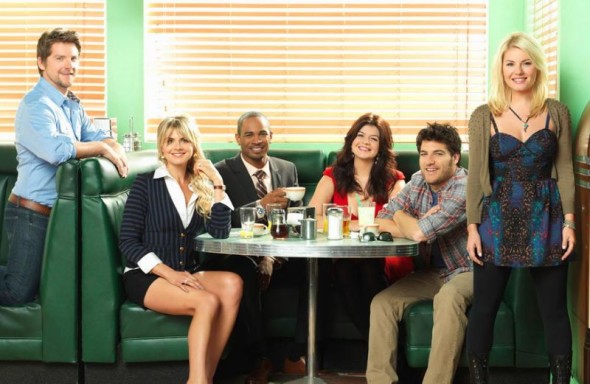 Will Happy Endings get the happy ending it deserved? According to The Hollywood Reporter, ABC boss Karey Burke hasn’t ruled out reviving the cancelled TV show.

The comedy series revolves around six young friends who live in Chicago. Their group is put in jeopardy when the couple that brought them together, Alex and Dave, break up. The cast includes Zachary Knighton, Elisha Cuthbert, Eliza Coupe, Damon Wayans Jr., Adam Pally, and Casey Wilson. The show ran on ABC for three seasons before being cancelled.

During this year’s summer TCA press conference, ABC chief Karey Burke told THR there may be a Happy Endings revival in the works:

I will never say never; I’m hearing whispers. That is a dream of a lot of people at ABC. I’m hearing that there’s a remote possibility of something. It’s at the very beginning [stages].”

Happy Endings was certainly one of my favorite ABC shows. One of the things Erin [Wehrenberg, head of comedy] and I bonded over when she came over [from Warner Bros. TV] to take over comedy development was a desire to do a show like Happy Endings, which led to a conversation about Happy Endings. So, I think she’s exploring what’s possible.”

What do you think? Are you a big fan of Happy Endings? Would you watch a revival?

Great show
Bring it back

Yes I would watch. I loved that show

Oh my gosh please please PLEASE bring back Happy Endings! Not since Friends has there been such fantastic chemistry between a comedic ensemble cast. My favorite actor changes from one episode to the next…but I think Elisha Cuthbert is the most underrated. She has amazing comic timing.
We need something great to watch again!

Please bring this AWESOME show back!!!

For sure! Happy Endings desperately deserves one for itself!

Yes!!! This was a funny show. It had my attention all the way until the end. The friendships in it were so true and it was, sometimes, too close “to home” !! =) BRING IT BACK !!!!

I could really use the laughs from this show; week after week they delivered consistent, funny material! BRING IT BACK!!!

Hell yeah! It was a great show that shouldn’t have been canx’d. One of those “perfect cast” shows that comes around ever once in a while. Would love to see it revived. With the same cast, that is.

Absolutely would love a revival!!

There’s a lot of shows I’d like to be revived before this one but I was a fan when it was on so I welcome it….I don’t think any of them are currently working on anything regularly right now so it should work!!!!

We would love to see Happy Endings again. Even one season.