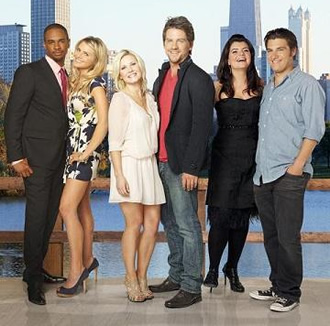 TV show description:
This sitcom revolves around six young friends who live in Chicago. Their group is put in jeopardy when the couple that brought them together, Alex and Dave, break up. Luckily, the former couple are able to (awkwardly) stay friends.

It looked like everything was going to be happily ever after for Dave Rose (Zachary Knighton) and Alex Moore (Elisha Cuthbert). They were the perfect couple and then, at the alter, Alex realized that she couldn’t follow through with the ceremony and left Dave standing alone, stunned.

Dave is still trying to figure out his life after his break up with Alex and occasionally needles her about it. After they split up, he moved in with one of his best friends, Max, and later quit his office job to run his own steak sandwich food truck. Alex still has some guilt about jilting Dave and runs her own downtown clothing boutique called Xela (that’s Alex spelled backwards).

Jane Williams (Eliza Coupe) is Alex’s control-freak older sister. She’s married to Brad, is more than a little competitive, and likes to be in charge. Brad Williams (Damon Wayans, Jr.) works for an investment firm and usually ends up doing what his wife wants, though he’s not always crazy about it. Dave introduced the couple to each other while they were still in college.

Max Blum (Adam Pally) has been best friends with Dave and Brad since college. He’s openly gay but it took him a long time to come out to his parents. He’s sarcastic, lazy, and, when not officiating at nondenominational weddings, often unemployed. He technically wasn’t licensed when he married Brad and Jane.

Penny Hartz (Casey Wilson) briefly dated Max in college, before she realized that he was gay. Since then, he’s been her “gay BFF.” Full of energy, she’s often worried that she’ll never find the right guy. Penny works at a public relations firm and prides herself on being nice and the best dressed person in the office.

Series Finale:
Episode #57 — Brothas & Sisters
Jane is tasked with planning the perfect wedding for her older sister, Brooke (guest Stephanie March). Her African American fiance, Elliott (guest James Lesure), is having a great time with the Kerkovichs while Brad feels like he’s the Jackie Robinson of the family, like he paved the way for Elliott.

Dave and Alex get locked in their own bathroom (again) and have a big talk about relationships. They realize that they never really allowed themselves enough time to have other relationships after their first breakup. So essentially, they were each other’s rebound from each other. They break up (again) and want to keep it a secret. They tell Max and Penny — who tell Alex’s gossipy family — and then everything gets out of hand.
First aired: May 3, 2013

What do you think? Do you like the Happy Endings TV series? Do you think it should have been cancelled or renewed for fourth season?

So sorry they did that I love this show right know Im watching reruns
BRING THE SHOW BACK!!!!!!!!!!!!!

This cast killed it with a litany of chuckles and belly aches! Too bad!

Agree I love all of them their all funny

This was one of my favorite shows! I’m bummed it’s cancelled!!!!

I just started watching it on Netflix as well and its really good. Funny, characters are all different and its hysterical! So sad its cancelled!

This is a great show…….I just started watching it on Net Flix……awesome…..can’t stop watching them. 🙂

I don’t know why people were not watching this.. totally missed out on a good show…

I may be in the minority, but I couldn’t get into this quirky show in either S1 or S2. I watched the 1st episode of S3 and I WAS HOOKED! Fell in love with the quirky characters and the show. Then I went back and bought S1 & 2 on DVD and actually really like it. Well, I guess that’s how it goes.

Save this show!!! It is SO FUNNY! It is the only sitcom that actually makes me laugh outloud. Give it another chance…PLEASE!!!!!!!!

There goes another great show I loved, sigh*

Agree! It would have made much more sense to air the show for at least another season even if it was only half the amount of episodes, at least it could have finished with Dave and Alex finally tying the knot, and justifying the name ‘happy endings’. Some decisions in TV land really baffle me. Happy Endings was gaining a cult following and was very clever, great characters and every episode was entertaining with some classic one liners. That gets cancelled but dozens of boring pedestrian humor shows with predictable tags stay on tv? I just don’t get it.

this was and is my favourite show. I laughed so hard I would cry sometimes. I am very sad it was cancelled. I really think the ratings dropped because we could never find when it was on! look at the following on facebook-very loyal fans! 🙂

I love this show. The reason the rating dropped this year was because it was hard to find when it was on!!! That was the networks fault. I set the PVR to catch every episode. I hope another network picks it up.

I love this show, please another network or someone.. Please Pick this show up!!!

I hope your wish comes true Mae Lin. Perhaps NBC will give it a chance. If I remember correctly Seinfeld had pretty poor ratings to start until it was nurtured along…..