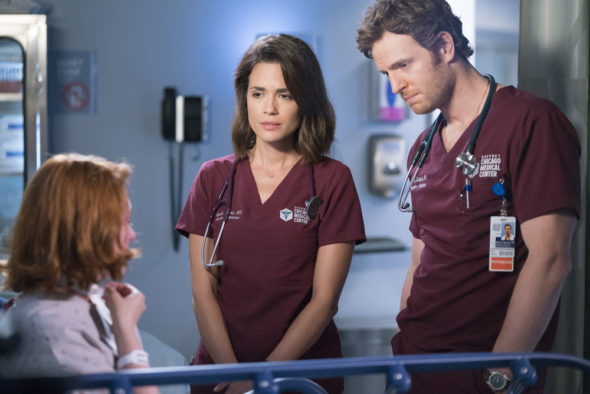 NBC can’t get enough of Chicago. Give Me My Remote reports the network has ordered additional episodes of Chicago Med, Chicago Fire, and Chicago PD for the 2018-19 season.

Currently, Chicago Med is in its fourth season, Chicago Fire in its seventh, and Chicago PD in its sixth season. The procedurals hail from Law & Order executive producer Dick Wolf.

Reportedly, all three NBC series have been given two extra episodes for the 2018-19 season, bringing each season total to 22 episodes. Chicago PD director Eriq La Salle announced the news on social media:

What do you think? Are you fan of NBC’s Chicago series? Which is your favorite?

Love all three Chicago of the best miss all and Antonio try to bring thru them back!. New girl is ok.

Love all three, only trouble with living in The UK is if it’s a three way cross over we normally get the middle episode first and have to wait several months for the start of the crossover

I love Chicago P.D. Chicago Med. and Chicago Fire they are all great, such wonderful writing and Amazing cast. Finally good television that’s actually worth watching, thanks guys….please keep up the good work !

I am a huge fan of this series! Hope this trio stays on for several more seasons.

Love the Chicago series. We never miss it. Talk Abby into coming back. To Fire.

Love Chicago Med,Fire and Police. Can’t get enough. Find myself viewing the syndicated episodes of Chi-Town Police. Great shows. Cuddo to cast and directors. You guys are on point!!!